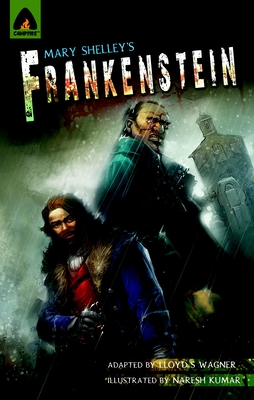 
Usually Ships in 1-5 Days
Man has long had the power to take life, but what will happen when he learns to give it?

Intrigued by this question, young Victor Frankenstein - a devoted student of science - becomes obsessed with the idea of conjuring life out of 'lifeless matter'. Using his formidable skills in chemistry and other sciences, Victor begins to assemble a being from scavenged and stolen body parts.

Once he has fathered a son created by his own science, Victor rejects the hideous creature he has brought to life. Eventually, the creature mounts a campaign of revenge against his creator, struggling to be recognised as a thinking, feeling being.

And so begins the battle between father and son...

First published anonymously in 1818, Frankenstein was the brainchild of author Mary Shelley. Over the years, this classic tale has been retold many times in several different formats.

Campfire's faithful graphic novel adaptation of Frankenstein brings an important and timeless story back to life.
Mary Wollstonecraft Shelley was born in London, England on 30th August 1797. She is best known for her novel Frankenstein which was published in 1818, when she was only 20 years old.

Shelley's interest in scientific fiction was influenced by her father, who was fascinated with developments in scientific thinking during the nineteenth century. This interest was followed by Shelley who would regularly attend scientific lectures in London.

Shelley's later novels never gripped the public's attention as Frankenstein had; the novel continues to intrigue modern readers, and has been the subject of several books and films.

Mary Wollstonecraft Shelley died of a suspected brain tumour on 1st February 1851.
Mary Shelley’s horror classic is a story meant to be illustrated. With language so richly vivid, readers can’t help but picture the horrors that emerge from her sharpened quill. What young reader wouldn’t want to see Dr. Frankenstein, reeling from the loss of his mother, patch together a quilt of human body parts? Whittling down the story to its most basic elements, Wagner achieves much success in adapting the slim volume with a good mix of action and emotion. Paired to Kumar’s haunting artwork, the adaptation will transport readers into the eeriest reaches of Frankenstein’s memory. The urgent pace of the original lends itself to comic format, and the illustrator runs with it: The muted palette evokes a spooky atmosphere, and, while most of the gore happens behind the scenes, his depiction of the creature is adequately grotesque. The edition includes an introduction to the author at its outset and an endnote about body snatching in the 1800s. A satisfyingly haunting introduction to a masterwork of English literature, likely to inspire further interest in all things Frankenstein.


"I highly recommend Campfire’s comics. They do what they are intended to do and do it in  a way that excites kids about classic literature."

— Chris Wilson, The Graphic Classroom (a resource for teachers and librarians)"Lloyd

S. Wagner's script follow(s) Shelley's narrative fairly closely. . . . a literary adaptation . . . which includes a one-page biography of Mary Shelley and a two-page historical feature on 'body-snatching' in 19th Century England. No age rating is given, but Shelley's gothic masterpiece with its multiple murders is clearly not for the youngest readers."

[A] fantastic way to read this story. . . Readers of all types will enjoy the visual experience of Mary Shelley's Frankenstein as a graphic novel.