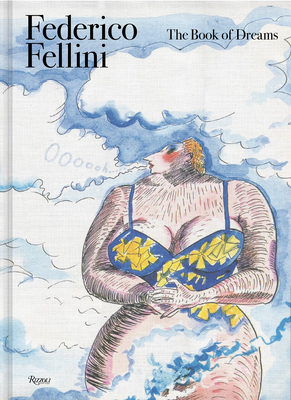 
On Our Shelves Now
This is a new edition of the diary kept by Federico Fellini, in which the great director faithfully recorded his dreams and nightmares.

A highly colorful journey into the boundless territory of a genius's imagination, this is a work that added a fundamental element to the study of Federico Fellini and his creative experience. From the late 1960s until 1990, the great director used this diary to represent his nocturnal visions in the form of drawings or, as he himself described them, "scribbles, rushed and ungrammatical notes."

Currently out of print, this new edition will include a critical introduction, as well as updated graphic design. It will be published in collaboration with the Municipality of Rimini as well as the Museo Nazionale del Cinema, the Centro Sperimentale di Cinematografia, and the Cineteca di Bologna (the three main Italian institutions in the field of cinema).

The volume will be released to coincide with the centenary of Federico Fellini's birth (January 2020), which will be celebrated in Italy with a traveling exhibition on the director that will start its journey from Milan in December 2019.
Sergio Toffetti, born in Turin in 1951, is president of the Museo Nazionale del Cinema and has published essays on Italian and international cinema, and on the conservation and restoration of film. Felice Laudadio is president of the Fondazione Centro Sperimentale di Cinematografia in Rome. He has overseen numerous cinema events, such as MystFest, EuropaCinema, and RomaFictionFest. Gian Luca Farinelli has been director of the Cineteca of Bologna since 2000. In 1986 he created, together with Nicola Mazzanti, Il Cinema Ritrovato an event dedicated to the history of cinema and the activity of film libraries. Together with Martin Scorsese, Raffaele Donato, Thierry Frémaux, and Alberto Luna he founded the World Cinema Foundation, which brings together about twenty great international directors for the restoration of third-world films.
"A treasury of the prolific, legendary Italian filmmaker’s drawings or, as he himself described them, “scribbles, rushed and ungrammatical notes.” Only they are much more. It’s a deep dive into the colorful, extravagant, and visionary mind of the genius, and we couldn’t be happier that it’s back in print in such an appropriately voluptuous edition. This new edition coincides with the centenary of Fellini’s birth and a traveling exhibition on the director." —INDULGE MAGAZINE

"This is a highly colorful journey into the boundless territory of a film director genius's imagination. It is a work that added a fundamental element to the study of Federico Fellini and his creative experience from the late 1960s until 1990, based on his prolific diaries."
—SOCIETY TEXAS

"Internationally renowned filmmaker Federico Fellini found his mature, oneiric style after delving into Jungian psychology in the early 1960s. Taking to recording his dreams around this time (between the filming of La Dolce Vita and 8 ½), he filled two notebooks with drawings that straddle the surreal and the comic. These felt-tip renderings find a lavish home in this substantial book." —MYDOMAINE.COM