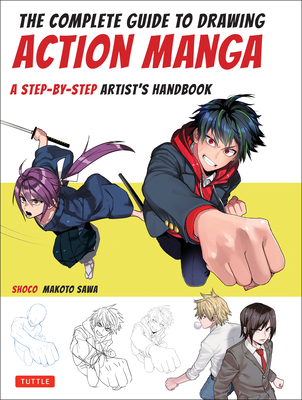 
Usually Ships in 1-5 Days
Whether your character is jumping for joy or grappling with an opponent, this book provides all the essential techniques to draw more lifelike action figures in the classic Japanese manga style. The comprehensive introduction first shows the reader the physical anatomy of male vs. female figures and gives important tips on proportions, perspective and small but often-overlooked details such as the relative differences between male and female hands, fingers and feet. Five subsequent chapters cover over 40 action poses in the following categories:
Each pose and movement is illustrated with a rough sketch outline followed by a highlighted manga drawing containing detailed annotations by the author. After studying the sketches, you practice the drawing techniques in a tracing section at the end of each chapter. Each chapter also provides professional tips on the use of color and shading for greater realism. Special sections contain information and tips on particular topics of interest, such as how to draw clothes, hair and facial expressions or how to create special effects. At the end of the book, an actual 6-page comic strip gives readers the opportunity to practice what they have learned by filling in the missing elements.
shoco is a Japanese manga artist and illustrator born in 1990. During a year in Paris as an exchange student, she spent nearly every day in the Louvre, constantly inspired by the artwork around her. She also spent a year studying art at the P.I. Art Center in New York. She has won numerous awards for her manga in Japan, which include The Rose and the Stray Dog and Samurai Lover. She is currently working on a new project. Japanese manga artist Makoto Sawa is best known in his home country for his work on the SQ.Crown and Blue Striker manga series.