Notable Native People: 50 Indigenous Leaders, Dreamers, and Changemakers from Past and Present (Hardcover) 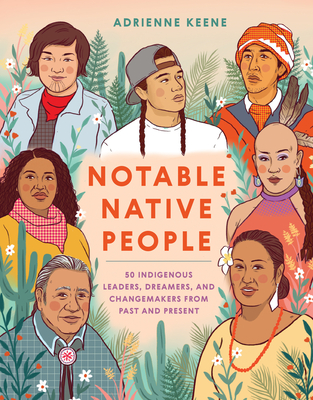 Notable Native People: 50 Indigenous Leaders, Dreamers, and Changemakers from Past and Present (Hardcover)

Celebrate the lives, stories, and contributions of Indigenous artists, activists, scientists, athletes, and other changemakers in this beautifully illustrated collection. From luminaries of the past, like nineteenth-century sculptor Edmonia Lewis—the first Black and Native American female artist to achieve international fame—to contemporary figures like linguist jessie little doe baird, who revived the Wampanoag language, Notable Native People highlights the vital impact Indigenous dreamers and leaders have made on the world.

This powerful and informative collection also offers accessible primers on important Indigenous issues, from the legacy of colonialism and cultural appropriation to food sovereignty, land and water rights, and more. An indispensable read for people of all backgrounds seeking to learn about Native American heritage, histories, and cultures, Notable Native People will educate and inspire readers of all ages.
Adrienne Keene is a citizen of the Cherokee Nation, an assistant professor of American studies and ethnic studies at Brown University, and holds a doctorate in culture, communities, and education from the Harvard Graduate School of Education. She cohosts the podcast All My Relations and is the longtime author of Native Appropriations, a blog discussing representations of Native peoples in popular culture. Her writing has appeared in such outlets as Teen Vogue, the New York Times, Stanford Magazine, and Indian Country Today, and she has appeared on NPR, CBC, Al Jazeera, PBS, BuzzFeed, and Slate's Represent podcast.

Ciara Sana is a Chamoru artist currently based in Bellingham, Washington, but grew up in Guam, where she was surrounded by a mix of Indigenous Chamoru culture and people from all over the Pacific islands, Asia, and the U.S. mainland. Ciara’s art is deeply rooted in her culture and inspired by all the different styles and flavors found on the beautiful island. The goal of her work is to empower and uplift others, celebrate differences, and encourage love.