Bubble in the Sun: The Florida Boom of the 1920s and How It Brought on the Great Depression (Hardcover) 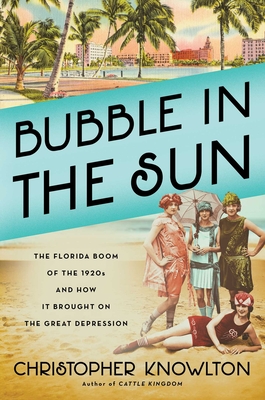 Bubble in the Sun: The Florida Boom of the 1920s and How It Brought on the Great Depression (Hardcover)


Email or call for price
Christopher Knowlton, author of Cattle Kingdom and former Fortune writer, takes an in-depth look at the spectacular Florida land boom of the 1920s and shows how it led directly to the Great Depression.

The 1920s in Florida was a time of incredible excess, immense wealth, and precipitous collapse. The decade there produced the largest human migration in American history, far exceeding the settlement of the West, as millions flocked to the grand hotels and the new cities that rose rapidly from the teeming wetlands. The boom spawned a new subdivision civilization—and the most egregious large-scale assault on the environment in the name of “progress.” Nowhere was the glitz and froth of the Roaring Twenties more excessive than in Florida. Here was Vegas before there was a Vegas: gambling was condoned and so was drinking, since prohibition was not enforced. Tycoons, crooks, and celebrities arrived en masse to promote or exploit this new and dazzling American frontier in the sunshine. Yet, the import and deep impact of these historical events have never been explored thoroughly until now.

In Bubble in the Sun Christopher Knowlton examines the grand artistic and entrepreneurial visions behind Coral Gables, Boca Raton, Miami Beach, and other storied sites, as well as the darker side of the frenzy. For while giant fortunes were being made and lost and the nightlife raged more raucously than anywhere else, the pure beauty of the Everglades suffered wanton ruination and the workers, mostly black, who built and maintained the boom, endured grievous abuses.

Knowlton breathes dynamic life into the forces that made and wrecked Florida during the decade: the real estate moguls Carl Fisher, George Merrick, and Addison Mizner, and the once-in-a-century hurricane whose aftermath triggered the stock market crash. This essential account is a revelatory—and riveting—history of an era that still affects our country today.
Christopher Knowlton is the author of Bubble in the Sun: The Florida Boom of the 1920s and How It Brought on the Great Depression. He is a former staff writer and London bureau chief for Fortune magazine. He also spent fifteen years in the investment business. His previous book was Cattle Kingdom: The Hidden History of the Cowboy West.
"The story of the 1920s real estate bubble in Florida has been told before, but Knowlton brings to it a vivid, spirited style and a colorful cast of characters who made quick fortunes and lost them just as quickly."  – New York Times

"A lucid account of the human and economic factors that drove a notorious land rush.” – Kirkus Review

"Knowlton successfully captures the vibrancy and mixed legacy of Florida’s boom years and makes a convincing...case for the state as an economic bellwether." – Publishers Weekly

“Knowlton…brings expertise, deep research and a brisk style to the book. It’s a dauntingly complex slice of history, but he examines it with clarity and insight, not to mention lots of juicy dish about the personal lives of some of the high rollers.”–Tampa Bay Times

“Knowlton delivers a captivating story, bubbling with colorful anecdotes and surprising research. As the triumphs and follies unfold, the narrative takes on a Canterbury Tales quality, drawing us into the turbulent lives of the real estate kings, crime bosses, cynical hucksters, and romantic visionaries who laid the foundation of modern Florida….[Knowlton] does vividly remind us that the metabolism of regional real-estate markets can affect the health of the overall economy. That timely lesson, one we forget at our peril, has rarely been taught with such panache.”  – AIR MAIL

“It is difficult to go wrong when writing of questionable behavior and wretched excess in Florida, a fact that is borne out yet again in Christopher Knowlton’s colorful Bubble in the Sun, a wide-ranging treatment of the ill-fated South Florida land boom of the 1920s.” – The Wall Street Journal

“Knowlton...has produced a lively and entertaining chronicle of the visionaries, rascals and hucksters who transformed Florida.” – Washington Post