Vegan for Everybody: Foolproof Plant-Based Recipes for Breakfast, Lunch, Dinner, and In-Between (Paperback) 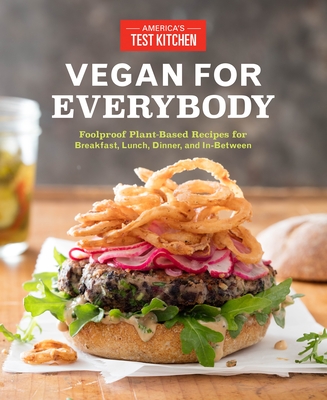 Vegan for Everybody: Foolproof Plant-Based Recipes for Breakfast, Lunch, Dinner, and In-Between (Paperback)


Usually Ships in 1-5 Days
America's Test Kitchen decodes and demystifies vegan cooking so you can reap its many benefits. Avoid the pitfalls of bland food, lack of variety, and overprocessed ingredients with approachable, fresh, vibrant recipes.

Can vegan cooking be flavorful? Satisfying? Easy to make? Through rigorous testing on the science of vegan cooking, America's Test Kitchen addresses these questions head-on, finding great-tasting and filling vegan protein options, cooking without dairy, preparing different whole grains and vegetables, and even baking. Reimagine mealtime by celebrating vegetables at the center of the plate and in salads and grain bowls. Take a new look at comfort foods with a surprisingly rich and creamy lasagna or hearty burger with all the fixings. Bake the perfect chewy chocolate chip cookie or a layer cake that stands tall for any celebration. With more than 200 rigorously-tested vibrant recipes, this cookbook has something satisfying for everyone--the committed vegan or simply those looking to freshen up their cooking.
America’s Test Kitchen is well-known for its top-rated television shows with more than 4 million weekly public television viewers, bestselling cookbooks, magazines, websites, and cooking school. The highly reputable and recognizable brands of America’s Test Kitchen, Cook’s Illustrated, and Cook’s Country are the work of over 60 passionate chefs based in Boston, Massachusetts, who put ingredients, cookware, equipment, and recipes through objective, rigorous testing to identify the very best. Discover, learn, and expand your cooking repertoire with Julia Collin Davison, Bridget Lancaster, Jack Bishop, Dan Souza, Lisa McManus, Tucker Shaw, Bryan Roof, and our fabulous team of test cooks!
“Here are the words just about any vegan would be happy to read: ‘Why This Recipe Works.’ Fans of America’s Test Kitchen are used to seeing the phrase, and now it applies to the growing collection of plant-based creations in Vegan for Everybody.” -- The Washington Post

"It’s not only vegans who get excited about vegan orange chicken. The esteemed America’s Test Kitchen included a recipe for the saucy main in its Vegan for Everybody cookbook that debuted in 2017. This multi-dimensional media organization is relentless when it comes to recipe testing—when you make an America’s Test Kitchen recipe, you know it’s going to work." -- VegNews

"Thanks to the clever folks at America's Test Kitchen, their detail-oriented 'Vegan for Everybody' cookbook delves into the realm of vegan home baking and proves that it's not impossible. Once you grasp a few basic concepts, you'll be whipping up baked goods that rival, or even surpass, their traditional counterparts." -- Katherine Martinko, TreeHugger.com