On Ya Warnie: The Ultimate Celebration (Paperback) 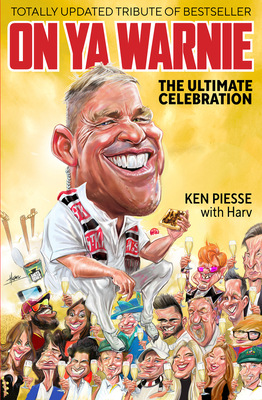 On Ya Warnie: The Ultimate Celebration (Paperback)


Email or call for price
Shane Warne was captivating and outrageous, a once-in-a-lifetime genius. The Warnie aura transcended the game. Always the grand master, he bought an unequaled theatre to the game. He was a rock star in creams: captivating, charismatic, and caring. He danced and cavorted, he challenged and flaunted. Australian sport’s ultimate headliner, he made cricket cool. No-one, not even Don Bradman, won more cricket matches for Australia.

On Ya Warnie celebrates Australia’s ultimate celebrity cricketer, taken from us so cruelly before his time. It features the yarns, the laughs, the
flippers, the fancies and much, much more.
Paul Harvey is one of Australia’s most talented, diverse, and accomplished artists. ‘Harv’ as he is widely known is widely celebrated and has had a long working relationship with sporting bodies. He has designed merchandise and on-field jumpers, on field mascots and club logos, caricatured major sponsors and retiring players, administrators, and sporting CEOs. He illustrates an illuminated certificate for the AFL Brownlow medalist each year, the AFL Hall of Fame and has illustrated the Life Membership certificates for Melbourne and Collingwood.

Ken Piesse is Australian sport’s master storyteller and most published living sports author. He has been a Warne devotee ever since 16-yearold Shane had him stumped in a school match at Keysborough. Ken was sitting in row 5 of the MCG’s old Cigar Stand when Warnie flippered out Richie Richardson. He was there when Warnie took his one and only hat-trick and he was there at St John’s when Warnie was sensationally axed from Australia’s Test team. Warnie contributed two forewords to two of Ken’s earlier books, Terry Jenner’s autobiography (in 1999) and a history of Warnie’s club, St Kilda CC 2005.