How Britain Broke the World: War, Greed and Blunders from Kosovo to Afghanistan, 1997-2022 (Hardcover) 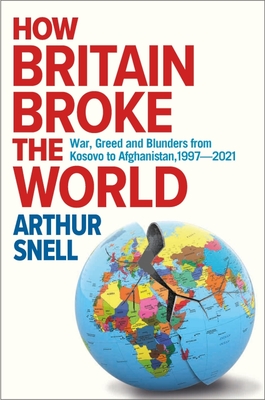 How Britain Broke the World: War, Greed and Blunders from Kosovo to Afghanistan, 1997-2022 (Hardcover)

- Endless war in the Middle East sends waves of migrants and terrorists washing around the world.

- And the biggest nations on Earth cannot agree effective action to stop the worst effects of global heating.

Instead of being a global force for good, Britain has often fostered instability and division. In fact, the UK's careless 'humanitarian' interventions, grandiosity and greed have helped to fracture the global order built after World War II.

Why is the world so dangerous now?

How Britain Broke the World is by former senior British diplomat Arthur Snell.

It critically assesses UK foreign policy over the past 25 years, from Kosovo in 1998 to Afghanistan in 2021, while also scrutinising British policy towards the powerhouses of the USA, Russia, India, and China.

Far from being unimportant, Snell reveals, Britain has often played a pivotal role in world affairs. For instance, London supplied the false intelligence that justified the Allied invasion of Iraq and plugged Russia's corrupt elite into Western economies.

Then come the bungled humanitarian interventions in foreign states.

Without the UK's marginal but key role, the author argues, it's likely that wars would not have blighted the Balkans, Iraq, and Libya, hundreds of thousands of lives would have been saved, and the world would be a safer place in the 2020s.

Taking in Russia's full-scale invasion of Ukraine in 2022, Snell charts the key political, economic and geographic factors that drive the behaviour of the most powerful and populous countries.

Like a diplomatic version of Prisoners of Geography by Tim Marshall, How Britain Broke the World reveals the ignominious reality of UK foreign policy and the true state of world affairs. It is a must-read for anyone interested in Britain's role in international affairs.

Buy the book to carry on reading