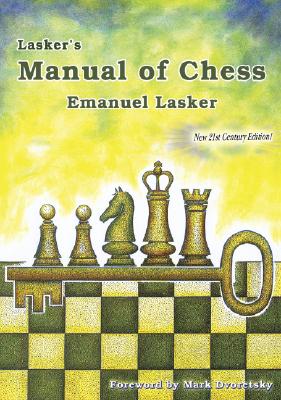 
Email or call for price
Lasker's Manual of Chess is one of the greatest chess books ever written. The fact that it was first published over 80 years ago has diminished neither its relevance nor significance in today's modern chess world.

Lasker was both a wonderful fighter and a deep thinker; his book is the quintessence of the exceptionally successful experiences he had over many long years, and his thoughts about them. He teaches what he himself considers most important: general principles and methods applicable to any situation. Once you have read the Manual, you will become smarter - afterwards, this is bound to help you, both in chess and in life.

Emanuel Lasker, the Second World Champion, begins at the most basic level, explaining the board, the pieces, how they move and then goes on to describe the fundamentals of chess strategy, chess tactics and even chess philosophy.

The result is one of best chess books ever written. This 21st Century Edition has been supplemented with dozens of archival photographs of Lasker and his contemporaries. In addition, an entertaining and instructive feature, Lasker Lore, highlights the chess history and trivia of the Lasker era.

Finally, if the significance of Lasker's Chess Manual, needed to offer more, the greatest chess instructor of the modern era, Mark Dvoretsky, has penned a special foreword to this new edition of the legendary classic.