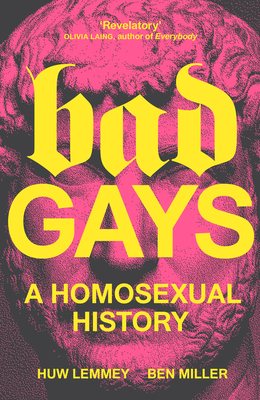 
On Our Shelves Now
An unconventional history of homosexuality

We all remember Oscar Wilde, but who speaks for Bosie? What about those ‘bad gays’ whose unexemplary lives reveal more than we might expect? Many popular histories seek to establish homosexual heroes, pioneers, and martyrs but, as Huw Lemmey and Ben Miller argue, the past is filled with queer people whose sexualities and dastardly deeds have been overlooked despite their being informative and instructive.

Based on the hugely popular podcast series of the same name, Bad Gays asks what we can learn about LGBTQ+ history, sexuality and identity through its villains, failures, and baddies. With characters such as the Emperor Hadrian, anthropologist Margaret Mead and notorious gangster Ronnie Kray, the authors tell the story of how the figure of the white gay man was born, and how he failed. They examine a cast of kings, fascist thugs, artists and debauched bon viveurs. Imperial-era figures Lawrence of Arabia and Roger Casement get a look-in, as do FBI boss J. Edgar Hoover, lawyer Roy Cohn, and architect Philip Johnson.

Together these amazing life stories expand and challenge mainstream assumptions about sexual identity: showing that homosexuality itself was an idea that emerged in the nineteenth century, one central to major historical events.

Bad Gays is a passionate argument for rethinking gay politics beyond questions of identity, compelling readers to search for solidarity across boundaries.
Huw Lemmey is a novelist, artist and critic living in Barcelona. He is the author of three novels: Unknown Language, Red Tory, and Chubz. He has written for the Guardian, Frieze, Tribune, the Architectural Review, New Humanist, the White Review, and L’Uomo Vogue, among others.

Ben Miller is a writer and researcher living in Berlin, where he is currently a Doctoral Fellow at the Graduate School of Global Intellectual History at the Freie Universität. He has written for the New York Times, Literary Hub, Los Angeles Review of Books, Tin House, and Radical History Review, and is the author of The New Queer Photography. Since 2018 he has been a member of the board of directors of the Schwules Museum, one of the world’s largest independent queer museums and archives.
“Why must liberatory history be populated by heroes? And what if it isn’t? Huw Lemmey and Ben Miller confront the shadowy side of queer history, a seamy underworld populated by evil twinks and psychopathic villains. Delectable gossip aside, this revelatory book is really an account of toxic power relations, always with an eye to a better, stranger, wilder future.”
—Olivia Laing, author of Everybody

“A smart, funny (and, just occasionally, catty) tour through the darker side of LGBTQ+ history. Far from being an excoriation, this book is a sign of confidence in a community that no longer has to present its antecedents as saints and martyrs but as real people: some of these gays were well-meaning but flawed; some of them were complicated; and some of them were just bloody awful.”
—Juliet Jacques, author of Variations

“A wry, rigorous account of centuries of gay villainy. Lemmey and Miller’s historiography sparkles with salacious details and delights in showing us that there is nothing new under the sun.”
—Shon Faye, author of The Transgender Issue

Included in Buzzfeed’s Best Books Releasing In May.

“An antidote to assumptions that anyone oppressed must be the good guy”
—Catherine Fletcher, History Today (“Books of the Year”)

“What a great way to do history/think about identity/consider the history of homosexuality. By turns uncomfortable, outrageous and hilarious, this book, taken from the podcast of the same name, was one of my unputdownables of 2022. Looking forward to the next edition already.”
—Julia Bell, White Review (“Best Books 2022”)