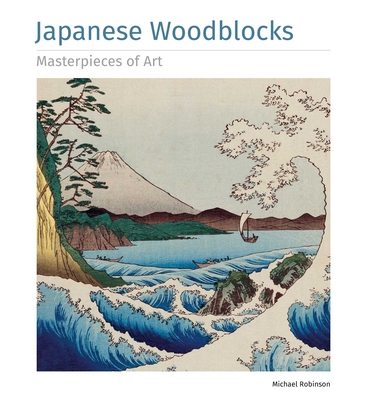 
On Our Shelves Now
Quick introduction, and packed with illustration the Masterpieces of Art focuses on the popular work of Hiroshige and Hokusai whose visions of waves and Mount Fuji have dominated the popular imagination for over 200 years.

Woodblock printing is a traditional artistic medium in Japan most renowned for its use in ukiyo-e or 'floating world' prints. Both moving and mesmerising, this medium captures scenes with considerable atmosphere and vibrancy whether it be crashing waves, autumn leaves or serene waterfalls. Beginning with a fresh and thoughtful introduction to Japanese woodblock art, Japanese Woodblocks Masterpieces of Art goes on to showcase key works by artists such as Katsuhika Hokusai and Ando Hiroshige.
Michael Robinson is a freelance lecturer and writer on British art and design history. Originally an art dealer with his own provincial gallery in Sussex, he entered academic life by way of a career change, having gained a first class honours and Masters degree at Kingston University. He is currently working on his doctorate, a study of early modernist period British dealers. He continues to lecture on British and French art of the Modern period.