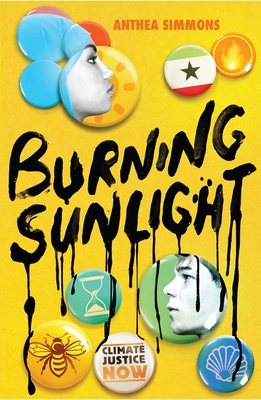 Zaynab is from Somaliland, a country that doesn’t exist because of politics and may soon be no more than a desert. Lucas is from rural Devon, which might as well be a world away. When they meet, they discover a common cause: the climate crisis.

Together they overcome their differences to build a Fridays For Future group at their school and fight for their right to protest and make a real impact on the local community. But when Zaynab uncovers a plot which could destroy the environment and people's lives back home in Somaliland, she will stop at nothing to expose it. Lucas must decide if he is with her or against her – even if Zaynab's actions may prove dangerous...

Anthea Simmons is the author of Share, The Best Best Baby, I’m Big Now and Lightning Mary and Burning Sunlight. She campaigns for European values and a fairer democracy.
"For anyone who wants to get involved in climate change activism but has always felt intimidated by the topic, this is the ideal introductory guide. Two teenagers start protesting with Extinction Rebellion's school strikes, and learn more about the politics of the climate emergency as they uncover a corrupt scheme by an oil company. This novel tackles some big, complex topics like greenwashing, feminist intersectionality and the disproportional effects of climate change on third world countries. It's incredibly well researched and ultimately uplifting, despite the difficult topics" - Lauren James - Climate Fiction Writers League

"A novel that might actually lead to some change ... scorching in more ways than one" - - Books for Keeps

"A passionate and gripping book, about the importance of standing up for what we believe in, of not making judgements about others, of allowing each other to learn and grow, and the power of friendship" - Saffia Farr - Juno magazine

"A gripping read, this is a hard-hitting story about the climate emergency and the important role everyone can play in campaigning to avert it... readers will be inspired" - Julia Eccleshare - LoveReading4Kids