Curious About Crocodiles (About Animals #7) (Hardcover) 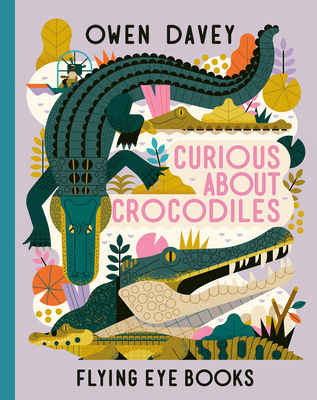 Curious About Crocodiles (About Animals #7) (Hardcover)

This is book number 7 in the About Animals series.

The seventh entry in illustrator Owen Davey's award-winning "About Animals" series, this one focuses on all different crocs, gators, caimans, and gharials, depicted in Davey's signature design-oriented, colorful, minimalist style. For fans of the classic Lyle, Lyle Crocodile, the Animal Battle book series and Scholastic's Who Would Win.

Did you know that crocodiles can live to be over 100 years old, and can climb trees to sunbathe? They can even sense the vibrations from a single drop of water falling from the mouth of a drinking wildebeest over sixty feet away.

Dive into the swamp with this fascinating illustrated guide to the largest reptiles on Earth. This isn't your average crocodile book for kids: it's full of juicy facts on crocodile behavior, biology and myth, and packed with details on how we can live with and protect our scaly companions.

Those familar with National Geographic Kids books and the other Owen Davey books in the series including Bonkers About Beetles and Fanatical About Frogs will enjoy sinking their teeth into yet another fact-filled animal encyclopedia on our favorite swamp thing.
Owen Davey is an award-winning Illustrator from the UK. He has produced many picture books which have been published in over 25 languages all over the world including 'Fanatical About Frogs' from his non-fiction ‘About’ series with Flying Eye Books which was shortlisted for the Blue Peter Book Awards 2020 and was Longlisted for the 2020 CILIP Kate Greenaway Medal. From the same series, 'Bonkers About Beetles' won Best in Show in the 3x3 Professional Show 2019. He has worked with clients including Google, Facebook, Sony, Lego and National Geographic and is the lead illustrator on the multi-award winning app Two Dots.