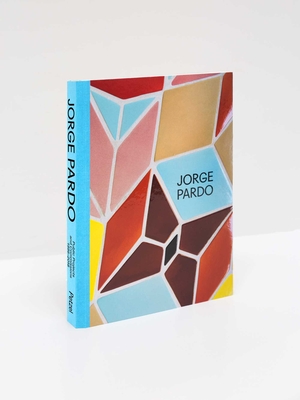 
Usually Ships in 1-5 Days
An exciting new monograph on Cuban-American artist Jorge Pardo documenting over 20 of his public projects in one volume for the first time, including 4166 Sea View Lane, Tecoh, L’Arlatan and many more.


With his eye-catching, eclectic outlook that expands the possibilities of everyday objects and spaces, Cuban-American artist Jorge Pardo has toed the line between designer, architect, and craftsman for over thirty years. From his signature sculptural lamps to his vibrant paintings to his wide-ranging installations, Pardo’s work engages viewers in visual delight while questioning distinctions between fine art and design. Nowhere is his dynamism on display at a greater scale than in his numerous public projects and commissions.

Jorge Pardo: Public Projects and Commissions, 1996–2018—the first monograph to focus strictly on the artist’s public works—documents, in extensive detail, twenty-four seminal projects and installations from Pardo’s oeuvre. In nearly 300 richly illustrated pages with over 200 full-color reproductions, including specially commissioned photographs, the book takes a close look at the private residences, museum installations, city squares, cafés, and other commissions that Pardo transformed with his energetic touch. These projects include 4166 Sea View Lane, Pardo’s earliest public work; his famous redesign of the Dia Center for the Arts lobby in New York City; and Tecoh, one of his most ambitious and largest works to date. Alongside text contributions by Emma Enderby, Maja Hoffman, and Ian Volner, Jorge Pardo also presents twelve of the artist’s never-before-seen “unrealized projects,” discussed in conversation with curator and art historian Hans Ulrich Obrist. Designed by Garrick Gott, the colorful pages are housed between a raised cover that replicates the mosaic tile floor of the boutique hotel L’Arlatan, one of the artist’s most celebrated accomplishments.
Jorge Pardo was born in Havana, Cuba in 1963 and studied at the University of Illinois, Chicago and received his BFA from Art Center College of Design in Pasadena, California. Pardo’s artwork explores the intersection of contemporary painting, design, sculpture, and architecture. Employing a broad palette of vibrant colors, eclectic patterns, and natural and industrial materials, Pardo’s works range from murals to home furnishings to collages to larger-than-life fabrications. He often transforms familiar objects into artworks with multiple meanings and purposes, such as a set of lamps displayed as both sources of illumination and as freestanding sculptures, or a sailboat exhibited as both a utilitarian, seaworthy vessel and as a striking obelisk. Working on small and monumental scales, Pardo also treats entire public spaces as vast canvases. Pardo engages viewers with works that produce great visual delight while questioning distinctions between fine art and design. Jorge Pardo currently lives and works in Merida, Mexico.

Hans Ulrich Obrist (b. 1968 in Zurich, CH) is Artistic Director of the Serpentine Galleries in London. Prior to this, he was the Curator of the Muse´e d’Art Moderne de la Ville de Paris. Since his first show, World Soup (The Kitchen Show) in 1991, he has curated more than three hundred exhibitions. Obrist has lectured internationally at academic and art institutions, and is a contributing editor to Artforum, AnOther Magazine, Cahiers d’Art, and 032c; he also writes columns for Das Magazin and Weltkunst. In 2011 he received the CCS Bard Award for Curatorial Excellence, and in 2015 he was awarded the International Folkwang Prize for his commitment to the arts. His recent publications include Ways of Curating (Farrar, Straus and Giroux, 2014), The Age of Earthquakes (with Shumon Basar and Douglas Coupland, Blue Rider Press, 2015), Lives of the Artists, Lives of Architects (Penguin, 2016), Mondialite´, or the Archipelagos of E´douard Glissant (edited with Asad Raza, Skira, 2017), Somewhere Totally Else (JRP|Editions, 2018), and The Athens Dialogues (DESTE Foundation for Contemporary Art/Koenig Books, London, 2018).

Emma Enderby is a curator, writer, and lecturer on modern and con- temporary art. She is currently the Chief Curator at The Shed, New York, where she curated the retrospective exhibition Agnes Denes: Absolutes and Intermediates (2019–20) and has worked with such artists as Ian Cheng, Tony Cokes, Trisha Donnelly, Lynn Hershman Leeson, Oscar Murillo, Toma´s Saraceno, and Carrie Mae Weems, and on the institution’s emerging art program, Open Call. As a curator at Public Art Fund, Enderby curated numerous solo projects such as Tauba Auerbach: Flow Separation (2018– 19), as well as group exhi- bitions Commercial Break (2017) and The Language of Things (2016). Previously, as exhibitions curator at the Serpentine Galleries, London, she organized exhibitions including Hilma af Klint: Painting the Unseen (2016), Trisha Donnelly (2014), Leon Golub: Bite Your Tongue (2015), and Haim Steinbach: once again the world is flat (2014).

Ian Volner has contributed articles on architecture, art, and design to Harper’s, Wall Street Journal, The Atlantic, and the New Yorker, among other publications, and is a contributing editor at Architect. His books include Philip Johnson: A Visual Biography (Phaidon, 2020) and The Great Great Wall (Abrams, 2019). He lives in the Bronx.

Maja Hoffmann is the founder of the Luma Foundation, which was established in 2004 in Switzerland, and focuses on the direct relationships between art, culture, human rights, environmental topics, education, and research. Under her leadership, its vision was actualized in the experimental campus Luma Arles, a cultural space in the South of France whose focus is on forward-thinking ideas and the changing nature of contemporary cultural production. Hoffmann is actively involved with a number of institutions internationally. She is currently the President of Swiss Institute, New York, and the Fondation Vincent van Gogh Arles, and the Vice President of the Emanuel Hoffmann Foundation, Basel. She also serves on the boards of Serpentine Galleries, London, Kunsthalle Zu¨rich, and, in New York, the New Museum of Contemporary Art and the Center for Curatorial Studies at Bard College.