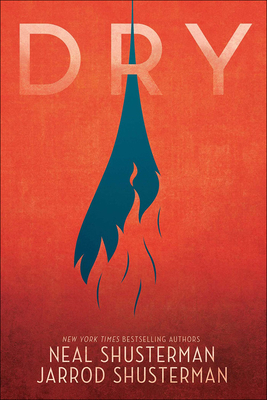 
Email or call for price
"The authors do not hold back." --Booklist (starred review)
"The palpable desperation that pervades the plot...feels true, giving it a chilling air of inevitability." --Publishers Weekly (starred review)
"The Shustermans challenge readers." --School Library Journal (starred review)
"No one does doom like Neal Shusterman." --Kirkus Reviews (starred review) When the California drought escalates to catastrophic proportions, one teen is forced to make life and death decisions for her family in this harrowing story of survival from New York Times bestselling author Neal Shusterman and Jarrod Shusterman. The drought--or the Tap-Out, as everyone calls it--has been going on for a while now. Everyone's lives have become an endless list of don'ts: don't water the lawn, don't fill up your pool, don't take long showers. Until the taps run dry. Suddenly, Alyssa's quiet suburban street spirals into a warzone of desperation; neighbors and families turned against each other on the hunt for water. And when her parents don't return and her life--and the life of her brother--is threatened, Alyssa has to make impossible choices if she's going to survive.
Neal Shusterman is the New York Times bestselling author of more than thirty award-winning books for children, teens, and adults, including the Unwind dystology, the Skinjacker trilogy, Downsiders, and Challenger Deep, which won the National Book Award. Scythe, the first book in his latest series, Arc of a Scythe, is a Michael L. Printz Honor Book. He also writes screenplays for motion pictures and television shows. Neal is the father of four, all of whom are talented writers and artists themselves. Visit Neal at StoryMan.com and Facebook.com/NealShusterman. Jarrod Shusterman is the New York Times bestselling coauthor of Dry. He has a passion for storytelling across many mediums, with love and multiculturalism as an ethos. Jarrod writes and directs with his partner Sofia, under their company Dos Lobos Entertainment. Together they enjoy traveling the world and learning new languages, living between Los Angeles and Spain. They can be found on Instagram @DosLobosMedia.