Avengers Campus: The Official Cookbook: Recipes from Pym's Test Kitchen and Beyond (Hardcover) 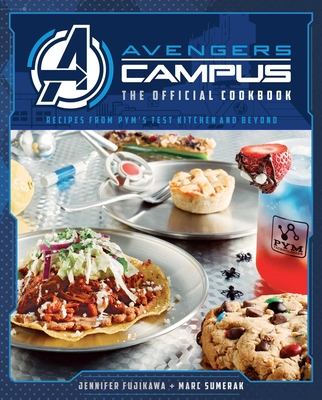 Avengers Campus: The Official Cookbook: Recipes from Pym's Test Kitchen and Beyond (Hardcover)


On Our Shelves Now
Take home the incredible cuisine of Avengers Campus, and prepare a meal fit for a super hero with this fun cookbook!

Cassie and Scott Lang (better known as Ant-Man) sought to use the shrinking and growing technology of Pym Particles to solve global hunger. At Pym’s Test Kitchen, guests can try a sampling of the Langs’ experiments, such as a massive Quantum Pretzel, and the Not so Little Chicken Sandwich. Now, Cassie shares the recipes for these dishes, as well as the cuisine of Avengers Campus at large, in this in-universe cookbook!

60+ RECIPES: This cookbook assembles food from the park, such as chicken shawarma wraps and Guardians of the Galaxy-inspired Cosmic Cream Orbs, as well as a variety of recipes inspired by the wider world of the Avengers. Featuring recipes for appetizers, main courses, desserts, and drinks, this cookbook is the ultimate guide for Marvel foodies.

BRING THE ADVENTURE HOME: Narrated by Cassie Lang herself, this cookbook is the perfect way to relive the fun of Avengers Campus.

THE PERFECT GIFT FOR ANY CHEF: Great for beginners and experienced quantum chefs alike, this cookbook will let you prepare amazing dishes for your friends and family.

COMPLETE YOUR MARVEL COLLECTION: This cookbook stands alongside fan-favorite cookbooks such as Marvel Eat the Universe: The Official Cookbook and Marvel Comics: Cooking with Deadpool.
Jenn Fujikawa is the lifestyle and pop culture author who has created content for Disney, Ghostbusters, Lucasfilm, Marvel, and more. She has written Star Wars: The Life Day Cookbook: Official Holiday Recipes From a Galaxy Far, Far Away, Gudetama: The Official Cookbook: Recipes for Living a Lazy Life, The I Love Lucy Cookbook: Classic Recipes Inspired by the Iconic TV Show, The Goldbergs Cookbook, and many more. Unique family dinners and geeky baking are a staple of her website www.justjennrecipes.com. She is based in Southern California.

Marc Sumerak is an Eisner and Harvey Award-nominated writer whose work has been featured in comics, books, and video games showcasing some of pop culture's most beloved franchises, including Marvel, Star Wars, Harry Potter, Firefly, Ghostbusters, Back to the Future, and many more. Most recently, he has been writing the story for the award-winning mobile game, MARVEL Future Revolution.