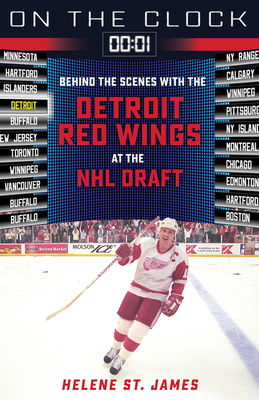 
Usually Ships in 1-5 Days
A singular, transcendent talent can change the fortunes of a hockey team instantly. Each year, NHL teams approach the draft with this knowledge, hoping that luck will be on their side and that their extensive scouting and analysis will pay off.

In On the Clock: Detroit Red Wings, Helene St. James explores the fascinating, rollercoaster history of the Red Wings at the draft, including franchise legends like Steve Yzerman, Sergei Fedorov, and Pavel Datsyuk.

Readers will go behind the scenes with top decision-makers as they evaluate, deliberate, and ultimately make the picks they hope will tip the fate of their franchise toward success.

From seemingly surefire first-rounders to surprising late selections, this is a must-read for Red Wings faithful and hockey fans eager for a glimpse at how teams are built.
Helene St. James has covered the Red Wings for the Detroit Free Press since 1996. Her work has appeared in several books. She has covered the team’s adventures in Sweden and the Czech Republic and has covered hockey at multiple Olympic Games. She is also the author of The Big 50: Detroit Red Wings.