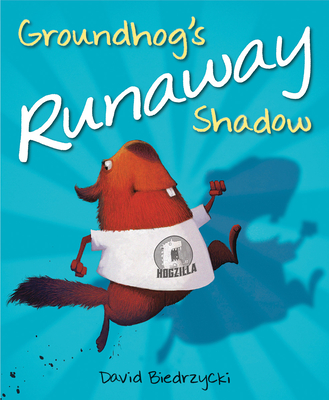 
On Our Shelves Now
Where does the groundhog's shadow go?

Phil and his shadow do everything together. But where Phil is steady, predictable, and a little boring, Shadow is adventurous, freewheeling—even a bit rude. So they don't get along so well anymore. Fed up, the two have a falling-out, and Shadow runs off to see the world.

Being friends isn't always easy. True friends, however, always find their way back to each other. If the groundhog doesn’t see its shadow come February 2nd, young readers will have an idea of where it might be, based on this heartwarming laugh-out-loud story accompanied by David Biedrzycki’s hilarious illustrations.
David Biedrzycki is the author and illustrator of the Breaking News series, the Ace Lacewing, Bug Detective series, and the Me and My Dragon series. He has been creating illustrations for book publishers, advertising agencies, magazines, and design firms since 1980. His art has graced the cover of KidSoft magazine, New England Aquarium billboards and children's software packaging, such as "The Amazon Trail" and "Odell Down Under." David has collaborated with children's author Jerry Pallotta on The Beetle Alphabet Book, The Boat Alphabet Book, and The Freshwater Alphabet Book. He grew up in Pennsylvania and now lives in Massachusetts with his wife and three children.
A groundhog mutiny! Will Phil's shadow ever return? Phil Groundhog is so fast the only thing that can keep up with him is his shadow. When he was little, doing everything together was fun for both of them. But now that Phil's grown up, he's left behind childish things, carrying a briefcase and wearing a tie. "Shadow, not so much." When Phil plays the accordion, Shadow wails out on a trumpet, not always on key. At a nice restaurant, Shadow fills the air with burps. Finally, Phil loses his temper and tells his shadow to "just go away!" Shadow is crushed, then angry, then realizes that he's always wanted to travel; off he goes. But while Shadow is checking out the pyramids, Phil is searching high and low to find him. He posts signs and puts an ad in the newspaper, to no avail. One day Phil sees an article about a mysterious shadow near the Eiffel Tower. Meanwhile, after all the initial excitement, Shadow realizes that he's lonely too. Phil and Shadow find each other for a buoyant musical reunion, Phil on accordion and the shadow on trumpet. Biedrzycki's fable on friendship comes to hilarious life with his bold, colorful, loopy illustrations, done in Adobe Photoshop. His judicious mix of panels and full-bleed spreads expertly controls the book's pacing. Delightful.
- Kirkus Reviews

Punxsutawney resident Phil, a furry brown groundhog, and his shadow have been constant companions but are growing apart, both in terms of personal proclivities ("Phil loved scary movies. Shadow, not so much") and all-around outlook ("Phil liked to be on time. Shadow liked to stop and smell the roses"). Biedrzycki (Breaking News: Bears to the Rescue) maximizes the differences between Phil and Shadow by giving the groundhog and his fellow animals an almost three-dimensional roundness, setting them in a carefully detailed and brightly colored world. Shadow, meanwhile, is rendered in flat, fuzzy-edged, gray-blue silhouettes, though that doesn't stop him from flirting with a rabbit on the subway or letting loose a giant burp while Phil quietly eats dinner. After matters come to a head, Shadow decamps to explore the world, eventually leading a remorseful Phil to seek out his absent companion. The somewhat drawn-out story can seem more like a platform for Biedrzycki's comic vignettes of Shadow's outsize behavior, but the Groundhog Day references are kept to a minimum, making this a story that could be enjoyed any time of year.
- Publishers Weekly