More Happy Than Not (Paperback) 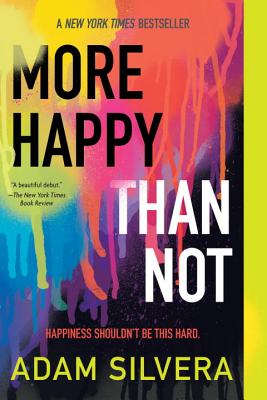 More Happy Than Not (Paperback)


Email or call for price
In his twisty, gritty, profoundly moving New York Times bestselling-debut—also called “mandatory reading” and selected as an Editors' Choice by the New York Times—Adam Silvera brings to life a charged, dangerous near-future summer in the Bronx.

In the months after his father's suicide, it's been tough for sixteen-year-old Aaron Soto to find happiness again—but he's still gunning for it. With the support of his girlfriend Genevieve and his overworked mom, he's slowly remembering what that might feel like. But grief and the smile-shaped scar on his wrist prevent him from forgetting completely.

When Genevieve leaves for a couple of weeks, Aaron spends all his time hanging out with this new guy, Thomas. Aaron's crew notices, and they're not exactly thrilled. But Aaron can't deny the happiness Thomas brings or how Thomas makes him feel safe from himself, despite the tensions their friendship is stirring with his girlfriend and friends. Since Aaron can't stay away from Thomas or turn off his newfound feelings for him, he considers turning to the Leteo Institute's revolutionary memory-alteration procedure to straighten himself out, even if it means forgetting who he truly is.

Why does happiness have to be so hard?

“Silvera managed to leave me smiling after totally breaking my heart. Unforgettable.”
—Becky Albertalli, author of Simon vs. The Homo Sapiens Agenda

"Adam Silvera explores the inner workings of a painful world and he delivers this with heartfelt honesty and a courageous, confident hand . . . A mesmerizing, unforgettable tour de force."
—John Corey Whaley, National Book Award finalist and author of Where Things Come Back and Noggin
Adam Silvera was born and raised in the Bronx. He has worked as a bookseller, as a community manager at a literary development company, and as a reviewer of children’s and young adult novels. His highly acclaimed debut novel, More Happy Than Not, was followed by History Is All You Left Me and the New York Times bestsellers They Both Die at the End and Infinity Son. He lives in Los Angeles and is tall for no reason.
Praise for More Happy Than Not

"A beautiful debut novel [that] manages a delicate knitting of class politics through an ambitious narrative about sexual identity and connection that considers the heavy weight and constructive value of traumatic memory . . . Aaron's Bronx universe [is captured] with a precision that feels at once dreamy and casually reportorial . . . Mandatory reading."
—The New York Times Book Review

“Adam Silvera’s debut novel takes on the delicate balancing act of covering some of life’s weightiest of topics: suicide, coming out, trauma, grief and urban poverty . . . Fully in control of the ambition of its plot, Silvera’s best seller marries the page-turning elements of a sci-fi narrative with incisive commentary on sexuality.”
—Time

“Silvera is a master of creating terrifying near futures that feature technology that's both intriguing and troubling.”
—Shondaland

“Aaron is one of the most interesting, authentic teen narrators I’ve met, and his story is told with incredible courage and unflinching honesty. Silvera managed to leave me smiling after totally breaking my heart. Unforgettable.”
—Becky Albertalli, National Book Award nominee and author of Simon vs. The Homo Sapiens Agenda

"Adam Silvera explores the inner workings of a painful world and he delivers this with heartfelt honesty and a courageous, confident hand. Combine these with a one-of-a-kind voice and a genius idea, and what you have is a mesmerizing, unforgettable tour de force."
—John Corey Whaley, National Book Award finalist and author of Where Things Come Back and Noggin

“Adam Silvera is a voice missing in YA fiction. The honesty of his words and his ability to tell a story make you realize that we’ve been waiting for him. I’m blown away.”
—Holly Goldberg Sloan, author of Counting by 7s and I'll Be There

"[Silvera] throws in a hugely rewarding, whiplash-worthy twist in the last third of the novel. A bold, inventive, raw look at male sexuality in an irresistible sci-fi package."
—The Globe and Mail

"[An] important addition to speculative fiction for young adults . . . Silvera's tale combines the best features of science fiction with social justice in this engaging read, as Aaron finds a place where he belongs."
—Los Angeles Times

"Heartfelt . . . The futuristic twist, with its poignant repercussions, drives home a memorable, thoroughly contemporary theme: who you are inside is not something that can or should be erased . . . Lose your memories, lose your pain, lose yourself."
—Chicago Tribune

"A gut-wrenching story telling of race and sexuality."
—The Guardian

“This is definitely at the top of my YA list. There’s a realness to its main character, Aaron Soto, and his struggle to be who he really is. It confronts race and sexuality in a way I haven’t seen in the genre before.”
—Latina Magazine

"Poignant . . . So engrossing that once you start it, you won't be able to put it down. Don't say we didn't warn you."
—TeenVogue.com

"This is a cry-on-the-subway book, so watch out."
—MTV.com

"This is a beautifully written book that seems to get sadder with every page, but never feels hopeless."
—Refinery29.com

"Silvera’s debut is equal parts gut-punch and warm hug, not to mention sweet, funny, creative, and a really welcome entry to YA with regard to having characters coming from a lower socioeconomic background."
—BN.com

"Silvera, like [Benjamin Alire Sáenz], is a beautiful writer. Aaron’s story is heart-wrenching, funny, inspirational, and eye-opening. This is a really special novel from an extremely gifted new writer."
—Bustle

"A compassionate read that you'll want to pass on to everyone you know."
—Metro US

"One of the most heartrending YA reads you’ll ever pick up. And despite the slight sci-fi twist, everything in the novel feels so very real. More Happy Than Not will leave you shaken for days, if not weeks."
—Paste Magazine

“Offers a sci-fi take on ‘conversion therapy,’ and faces the worst of anti-gay bigotry and violence head on.”
—Vulture

"What to expect if you read this unique story: complete and absolute heartbreak, probably tears (unless you're heartless, that is), and moments that will make you smile ear to ear."
—PopCrush.com

"[Silvera] explores the possibilities of a world where death, and life, can be forgotten, roles rewritten and broken hearts mended. This is a story not just of a young man coming out, but a dramatic and heart-wrenching story of first loves, first heartbreaks, grief and the quest for happiness."
—Shelf Awareness, Starred Review

"For its explorations of sexuality, poverty, and race in the Bronx along with its subversion of the traditional hero’s journey, More Happy Than Not is one of this summer’s most anticipated YA debuts. And if you’re hesitant about its 'YA' distinction, the novel is also an absorbing, thought-provoking, and timely read for people of all ages—perfect for a day on the beach."
—NEXT Magazine

"[A story] of love and expectation and self-discovery, and of declaring yourself to a world that will never give you a soft landing."
—B&N Teen Blog

"A dark and deeply affecting book, More Happy than Not asks young readers to reflect courageously on the value of memory and self."
—The Monitor

"Throughout the story, the reader will find herself wanting to hug Aaron, shake him, and ultimately her heart will break for him. This reporter finished the book as though Aaron’s life depended on it."
—Planet Jackson Hole

"No matter who you are, More Happy Than Not is almost impossible not to enjoy."
—Bucks County Courier Times

"A mind-blowing story . . . A story about love, and acceptance that will absolutely break your heart."
—PopCrush.com

"Revolutionary . . . strikingly poignant . . . It is a stunning examination of why we make the choices we make."
—BookBrowse.com

"On top of the fact that More Happy Than Not is a great young adult novel and a great debut novel, this is just a good book. It's heartbreaking, funny and hopeful, and I don't think I'll be able to forget it."
—The Spencer Daily Reporter

"Many readers will identify with Aaron, whether or not they are dealing with issues of orientation . . . Silvera draws wonderfully complex characters and deftly portrays the relationships among them. The true beauty of this book is the way Silvera subtly reveals the plot—readers find Aaron coming out to them in a gradual way."
—VOYA

"Vividly written and intricately plotted: a well-executed twist will cause readers to reassess what they thought knew about Aaron's life . . . Beyond gritty . . . Silvera pulls no punches."
—Publishers Weekly, Starred Review

"A fresh spin on what begins as a fairly standard, if well executed, story of a teen experiencing firsts—first love, first sex, first loss—and struggling with his identity and sexuality . . . Prejudice is illustrated with gut-wrenching brutality and its effects are scarring, but Silvera tempers it with the genuine love and acceptance Aaron receives from a few important friends and family members . . . Ingenious."
—Booklist, Starred Review

"Places a straightforward concept—what if you could erase unwanted memories?—squarely within an honest depiction of the pains of navigating the teen years and upends all expectations for a plot resolution . . . A multifaceted look at some of the more unsettling aspects of human relationships. A brilliantly conceived page-turner."
—Kirkus Reviews, Starred Review

"The novel takes an unexpected, complex turn . . . In the end, readers are left with a gripping story about one memorable teen, and if it also leaves them pondering how his life might have been different if various elements had been improved, that is likely the exact takeaway intended."
—The Bulletin of the Center for Children's Books

"[Silvera is] a phenomenal talent and is destined to be a star."
—James Dawson, author of This Book Is Gay

"Raw, emotional, and genuine."
—Nerds and Beyond

"An important new voice in YA literature, in More Happy Than Not Adam Silvera has created a passionate, searing narrative with characters who feel unique and totally familiar. I found myself rooting for Aaron Soto and his family from page one. More Happy Than Not is an unforgettable read."
—Alex London, author of Proxy and Guardian

"A debut as deft as it is sharp, as honest as it is assured, and, above all, extremely moving. Silvera pulls his punches with an energy, daring, and intensity that left me spellbound—and reminded me why I love to read."
—Adele Griffin, author of The Unfinished Life of Addison Stone

“Adam Silvera’s More Happy Than Not is a fantastic magic trick I haven't stopped thinking about since I finished reading and suspect will stay with me for some time to come.”
—Jasmine Warga, author of My Heart and Other Black Holes

"Adam Silvera harnesses a certain reckless energy and unleashes it through the voice of Aaron Soto. Aaron Soto is astounding, full of heart, wit, youthful energy, and a deep desire to be honest about who he is in the world. He sinks into your skin so you can't stop thinking about him even when you aren't reading. High on story, character, and some perfectly executed twists, I loved this book."
—David Arnold, author of Mosquitoland