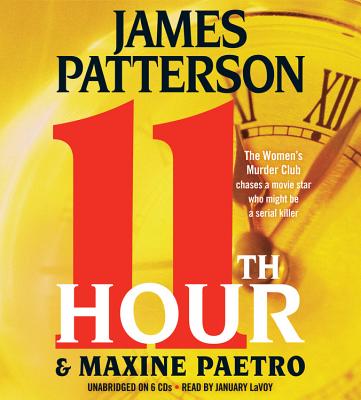 
Email or call for price
Your best friend

Lindsay Boxer is pregnant at last! But her work doesn't slow for a second. When millionaire Chaz Smith is mercilessly gunned down, she discovers that the murder weapon is linked to the deaths of four of San Francisco's most untouchable criminals. And it was taken from her own department's evidence locker. Anyone could be the killer--even her closest friends.

Or a vicious killer?

Lindsay is called next to the most bizarre crime scene she's ever seen: two bodiless heads elaborately displayed in the garden of a world-famous actor. Another head is unearthed in the garden, and Lindsay realizes that the ground could hide hundreds of victims.

You won't know until the 11th hour

A reporter launches a series of vicious articles about the cases and Lindsay's personal life is laid bare. But this time she has no one to turn to--especially not Joe. 11TH HOUR is the most shocking, most emotional, and most thrilling Women's Murder Club novel ever.
James Patterson has had more New York Times bestsellers than any other writer, ever, according to Guinness World Records. Since his first novel won the Edgar Award in 1977 James Patterson's books have sold more than 300 million copies. He is the author of the Alex Cross novels, the most popular detective series of the past twenty-five years, including Kiss the Girls and Along Came a Spider. He writes full-time and lives in Florida with his family.

"Those who haven't read any of the novels in the Women's Murder Club series are cheating themselves."—BookReporter.com

"I can't believe how good Patterson is, whether he's doing a Washington police yarn or traveling a different road with a female narrator. He is always on the mark. I have never begun a Patterson book and been able to put it down."—Larry King, USA Today

"Patterson and Paetro are at their best here, weaving a number of plots together to create a novel that dips and flows across genre lines.... A series that shows no signs of fatigue or flagging."—BookReporter.com