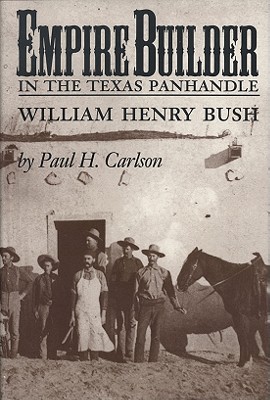 
Usually Ships in 1-5 Days
In Empire Builder in the Texas Panhandle, author Paul H. Carlson tells the story of Chicago-based William Henry Bush and his role in shaping development of the Texas Panhandle from the 1880s to the 1930s.  In 1881, Bush secured interest in the sprawling Frying Pan Ranch — a ranch that covered two counties and bordered what would later become Amarillo. The ranch's unlikely new owner from the north was a clothing wholesaler, real estate developer, philanthropist, and fledgling cattleman. As an outsider, he brought his business savvy and vision of civic growth to bear on one of America's last frontiers. In an age of unrestricted capitalism and flamboyant displays of wealth, Bush's style was quiet and unassuming. A major real estate owner in the burned-over district of post-1871 Chicago, Bush cast his eye elsewhere for opportunity and found it in the Texas Panhandle. There, he risked his future and fortune on a region that had been left largely untouched by commerce.  By the late 1880s, Bush had taken greater control over operations at the Frying Pan Ranch, assuming a major role as a business and civic leader in the region. His philanthropic efforts focused on the vitalization of Amarillo—helping to create a community that would come to dominate the Panhandle by the 1930s.
PAUL H. CARLSON is a professor of history at Texas Tech University in Lubbock. He is the author of six books, including The Plains Indians and The Buffalo Soldier Tragedy of 1877, both published by Texas A&M University Press.
" . . . . Carlson's book is a fine addition to histories of the Panhandle, and his writings about the region belong with those of some of the older historians and luminaries of West Texas . . . ."--Southwestern American Literature
— Southwestern American Literature