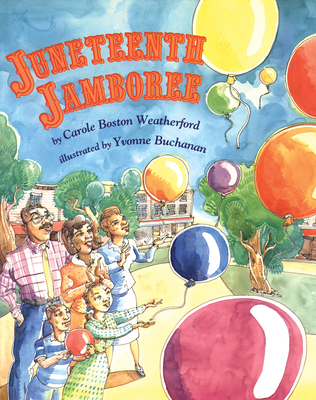 A young girl, who has just moved to her parents' hometown, realizes that she has come home after the African American emancipation celebration of Juneteenth.

It's a fine day in June. Cassandra's family has just moved from the city back to her parents' hometown in Texas. Cassie likes her new house, and her new school is okay, but Texas doesn't quite feel like home yet.

What Cassie doesn't know is that her family has a surprise for her - a Texas tradition. As she helps prepare red velvet cake, fried chicken, and piles of other dishes, she wonders what makes June 19th so important. It isn't until Cassie and her family arrive downtown that she discovers what the commotion is about. And, in the process, she realizes that she and her family have indeed come home.

With text and illustrations as warm as a summer day, author Carole Boston Weatherford and artist Yvonne Buchanan bring the African American emancipation celebration of Juneteenth to life for children. Readers of all ages will delight in this declaration of freedom and homecoming.

Carole Boston Weatherford is a poet and writer of numerous children's books, including Moses: When Harriet Tubman Led Her People to Freedom, Dear Mrs. Rosenwald, The Sound That Jazz Makes, and Lee & Low's Jazz Baby. She is a contributing poet to In Daddy's Arms I Am Tall, also published by Lee & Low Books. Weatherford was an NAACP Image Award finalist for her book The Sound That Jazz Makes. She lives in High Point, North Carolina, with her husband and their children. Juneteenth Jamboree is her first book. Yvonne Buchanan is a versatile artist whose political illustrations have appeared in the New York Times, Washington Post, and Los Angeles Times. She also created the award-winning animated children's video, Follow the Drinking Gourd: The Story of the Underground Railroad. Buchanan lives in Syracuse, New York.