The Way of Tarot: The Spiritual Teacher in the Cards (Paperback) 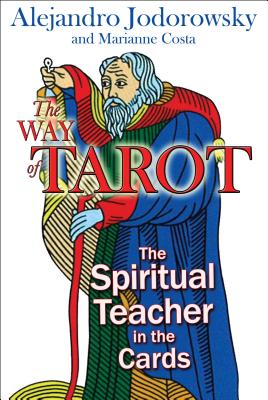 The Way of Tarot: The Spiritual Teacher in the Cards (Paperback)

Alejandro Jodorowsky’s profound study of the Tarot, which began in the early 1950s, reveals it to be far more than a simple divination device. The Tarot is first and foremost a powerful instrument of self-knowledge and a representation of the structure of the soul.

The Way of Tarot shows that the entire deck is structured like a temple, or a mandala, which is both an image of the world and a representation of the divine. The authors use the sacred art of the original Marseille Tarot--created during a time of religious tolerance in the 11th century--to reconnect with the roots of the Tarot’s Western esoteric wisdom. They explain that the Tarot is a “nomadic cathedral” whose parts--the 78 cards or “arcana”--should always be viewed with an awareness of the whole structure. This understanding is essential to fully grasp the Tarot’s hermetic symbolism.

The authors explore the secret associations behind the hierarchy of the cards and the correspondences between the suits and energies within human beings. Each description of the Major Arcana includes key word summaries, symbolic meanings, traditional interpretations, and a section where the card speaks for itself. Jodorowsky and Costa then take the art of reading the Tarot to a depth never before possible. Using their work with Tarology, a new psychological approach that uses the symbolism and optical language of the Tarot to create a mirror image of the personality, they offer a powerful tool for self-realization, creativity, and healing.
Alejandro Jodorowsky is a playwright, filmmaker, composer, mime, psychotherapist, and author of many books on spirituality and tarot, and over thirty comic books and graphic novels. He has directed several films, including The Rainbow Thief and the cult classics El Topo and The Holy Mountain. He lives in France. In 2019, Alejandro Jodorowsky was cited as one of the "100 Most Spiritually Influential Living People in the World" according to Watkins Mind Body Spirit magazine.

Marianne Costa has worked with Jodorowsky since 1997, coteaching workshops on Tarot and family tree-therapy. The author of No Woman’s Land, she lives in Paris.
"A profound work that is both penetrating and fascinating. It offers thought-provoking commentary on the cards from a pair of authors who are among the world's most deeply knowledgeable authorities on the tarot."
— Kooch Daniels, co-author of Matrix Meditations, Oct 2009

"The Way of Tarot is a very impressive work. Whether you agree with the authors conclusions or not, it will make you think outside of the box, and will perhaps be the impetus needed for someone out there in the Tarot world to connect the dots between their thoughts and present them for examination. . . . This is a worthwhile addition to the Tarot library of anyone that wishes to move beyond the divination aspects of the cards into self-realization."
— Bonnie Cehovet, certified Tarot Grand Master, Aeclectic Tarot, Oct 2009

"An excellent all-around guide to both the nuts-and-bolts practical and the spiritual sides of Tarot, The Way of Tarot is filled with invaluable insights for Tarot practitioners of all skill and experience levels."
— The Midwest Book Review, Library Bookwatch, Feb 2010

"The beginning of this book reads like a sophisticated treasure-hunt adventure. It also happens to include a history of tarot cards, which will be invaluable to people who are studying tarot seriously. . . . a reference they can go back to over and over again as they gain experience with the cards."
— Anna Jedrziewski, New Age Retailer magazine, Feb 2010

"The purpose of this book is to show the reader how the tarot can be seen and used in a practical way that is holistic, balanced,and grounded. . . . The Way of Tarot can be a guide along this path."
— New Spirit Journal, Vol. 5, No. 12, April 2010

"The beauty of this deck is that Jodorwsky puts aside the Kabalistic and other Western influences upon the tarot and just studies the primal and bare gestures, numbers, and minute details . . . "
— Indras Net, blog: The Sync Whole;@The Heart of Jupiter-Evolve!, Mar 10