What You Did Not Tell: A Father's Past and a Journey Home (Paperback) 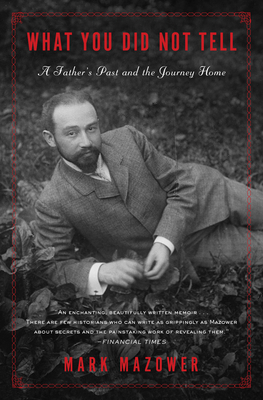 What You Did Not Tell: A Father's Past and a Journey Home (Paperback)


On Our Shelves Now
A warm, insightful memoir by an acclaimed historian that explores the struggles of twentieth-century Europe through the lives and hopes of a single family—his own

Following his relatives’ remarkable stories, Mark Mazower recounts the sacrifices and silences that marked a generation and their descendants. With a rich array of letters, photographs, interviews, and archives, he creates a moving portrait of a family that fate drove into the siege of Stalingrad, the Vilna ghetto, occupied Paris, and even the ranks of the Wehrmacht. His British father was the lucky one, the son of Russian Jewish emigrants who settled in London after escaping civil war and revolution. Max, the grandfather, had started out as a member of the socialist Bund organization and manned the barricades against tsarist troops, but never spoke of it. His wife, Frouma, came from a family ravaged by the Great Terror yet somehow making their way in Soviet society.

In the centenary of the Russian Revolution, What You Did Not Tell recalls a brand of socialism erased from memory: humanistic, impassioned, and broad-ranging in its sympathies. But it also examines the unexpected happiness that may await history’s losers, the power of friendship, and the love of place that allowed Max and Frouma’s son to call England home.
Mark Mazower is a historian specializing in modern Greece, twentieth-century Europe, and international affairs. He is currently the Ira D. Wallach Professor of History at Columbia University. His books include Salonica, City of Ghosts: Christians, Muslims and Jews, 1430–1950, winner of the Duff Cooper Prize and the Runciman Award; Hitler’s Empire: Nazi Rule in Occupied Europe, winner of the LA Times Book Prize for History; Dark Continent: Europe’s Twentieth Century; and Governing the World: The History of an Idea, a Financial Times Best Politics Book. His articles and reviews on history and current affairs appear regularly in the Financial Times, the Guardian, the London Review of Books, The Nation, and the New Republic. Born in London and educated at Oxford, he lives in Manhattan.
“Mark Mazower is a great historian and a subtle writer always attentive to humane detail.” —Orhan Pamuk, recipient of the 2006 Nobel Prize in Literature

“Within the experience of a single family can be seen the forces that shaped whole nations and peoples…Mark Mazower, a distinguished British-born historian, explores the story of his own family, especially that of his paternal grandparents, Jews who emerged at the turn of the twentieth century from the poverty and backwardness of the Russian provinces into the ferment of socialist struggle and, eventually, into the turmoil of the wider world.”—Wall Street Journal

“Unusual and exceptionally interesting…[Mazower] excavates, through rigorous research and tenacious sleuthing, the history of a family whose lives spanned the entire twentieth century, and whose fates were closely interwoven with its many ideological terrors and violent upheavals.” —New York Review of Books

“A fascinating and scholarly reconstruction of a family’s life and the myriad relations, friends, acquaintances, places, houses, and adventures that spin out from it…What You Did Not Tell is proof of what historical research can yield, providing you have the determination, skill and boundless curiosity to pursue it to the bitter end.” —The Guardian

“‘How is it that the places we live in come to feel that they are ours?’ a noted historian asks in this exacting memoir…Mazower, plowing through letters, diaries, and archives, finds that his grandfather’s story encompasses many of the horrors of twentieth-century Europe.” —The New Yorker

“Many families have stories that are passed down to the next generation, but Mazower has gone beyond storytelling and legend. He has repaid the debt to those who went before him.” —Jerusalem Post

“An enchanting, beautifully written memoir…There are few historians who can write as grippingly as Mazower about secrets and the painstaking work of revealing them.” —Financial Times