What's the Use?: How Mathematics Shapes Everyday Life (Hardcover) 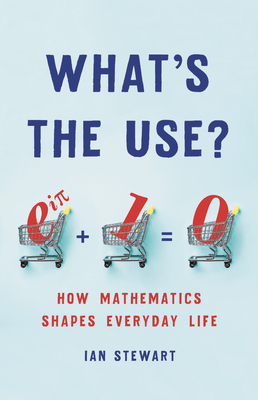 What's the Use?: How Mathematics Shapes Everyday Life (Hardcover)


Usually Ships in 1-5 Days
See the world in a completely new way as an esteemed mathematician shows how math powers the world—from technology to health care and beyond.
Almost all of us have sat in a math class, wondering when we'd ever need to know how to find the roots of a polynomial or graph imaginary numbers. And in one sense, we were right: if we needed to, we'd use a computer. But as Ian Stewart argues in What's the Use?, math isn't just about boring computations. Rather, it offers us new and profound insights into our world, allowing us to accomplish feats as significant as space exploration and organ donation. From the trigonometry that keeps a satellite in orbit to the prime numbers used by the world's most advanced security systems to the imaginary numbers that enable augmented reality, math isn't just relevant to our lives. It is the very fabric of our existence.
Ian Stewart is Emeritus Professor of Mathematics at the University of Warwick. He is the accessible and successful (and prolific) author of numerous Basic books on mathematics including, most recently, Calculating the Cosmos. Stewart is also a regular research visitor at the University of Houston, the Institute of Mathematics and Its Applications in Minneapolis, and the Santa Fe Institute. He was elected a Fellow of the Royal Society in 2001. His writing has appeared in New Scientist, Discover, Scientific American, and many newspapers in the U.K. and U.S. He lives in Coventry, England.

“Reading this book is like being empowered with special x-ray vision that lets you see the math whirring away at the heart of vital technologies all around. It takes you time-traveling too, showing how the “pure” math of the past has found its way astonishingly often into present-day marvels, from helping the FBI match fingerprints by computer to guiding organ donations to enabling posthumous appearances by Carrie Fisher in Star Wars movies. In short, it’s another Ian Stewart classic.”
—David Stipp, author of A Most Elegant Equation

“Science enthusiasts will enjoy Ian Stewart’s discussion of mathematical results, originally devised to solve esoteric problems, that have surprising applications to our everyday lives.  From computer graphics to climate change to kidney donations, he reveals the “unreasonable effectiveness” of abstract mathematics in the service of science and technology – a service as important as it is improbable.”
—William Dunham, author of Journey Through Genius

“Ian Stewart is math’s greatest ambassador. No other author writes with such ease, erudition and depth of understanding across such a wide range of mathematical fields.”
—Alex Bellos, author of Here’s Looking at Euclid

“If you believe mathematics offers little of practical use, Stewart is back to show you the error of your ways...Richly informative."—Kirkus