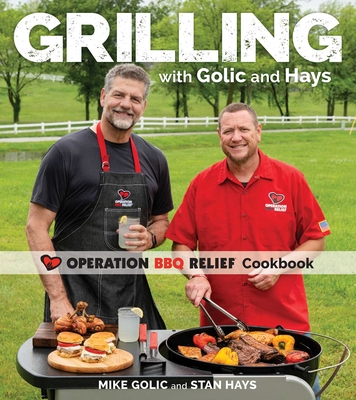 
On Our Shelves Now
Champion pitmaster and CEO and co-founder of Operation BBQ Relief Stan Hays joins forces with NFL veteran and former ESPN Radio host Mike Golic in this celebration of the connection of BBQ and sports.

Good for the stomach, better for the soul—quality comfort barbecue and side dishes that reflect the character and warmth of the national nonprofit Operation BBQ Relief. The 80+ recipes from your favorite sports stars, pitmasters, and chefs combine the worlds through the power of food.

Grilling with Golic and Hays: Operation BBQ Relief Cookbook aims to inspire hope and compassion through the stories of overcoming challenges that are present in both the athletic world and the work of Operation BBQ Relief. Armed with a caravan of cooks, mobile pits, kitchens, and volunteers, Operation BBQ Relief delivers support through hot meals in times of need, feeding first responders and communities affected by natural disasters, along with year-round efforts to fight hunger through various programs.

Each of the 80+ comforting recipes—from appetizers to ribs, and from seafood to desserts—will include a short biography of each sports star or chef contributor. Gorgeous photography throughout the book showcases recipes such as:Barbecue and sports have connected people and families everywhere, from tailgates to sports watch parties. It is this connection that also drives the heart of Operation BBQ Relief and each community they serve with hope, friendship, and compassion.

Mike Golic, former nine-year NFL veteran and radio host for ESPN’s Mike & Mike, brings awareness to the mission of Operation BBQ Relief on the national level as a spokesperson for 2021. Passionate about barbecue and serving his community, Golic supports Operation BBQ Relief.  Prior to working with Operation BBQ Relief, Golic was a prominent figure at ESPN. During his time with the worldwide leader, he was best known for being half of the popular morning show Mike & Mike on ESPN Radio and later Golic & Wingo. His 23-year excellence on ESPN Radio earned him a spot in both the Radio and NASB Halls of Fame. He also served as an NFL studio analyst on NFL Live and worked as a color commentator for arena, college, and NFL football. Prior to working at ESPN, Golic played for the Houston Oilers, Philadelphia Eagles, and Miami Dolphins.

Stan Hays is the CEO and co-founder of Operation BBQ Relief. A seasoned and accomplished competitor on the barbecue circuit, Hays and fellow cofounder Will Cleaver launched Operation BBQ Relief when a tornado swept through Joplin, Missouri, in 2011. Hays’s passion for barbecue and assisting those in distress culminated in creating Operation BBQ Relief, which has served over 9 million meals in 30 states. In 2017, Hays was recognized as a “CNN Hero” for his work with Operation BBQ Relief. Hays has participated in more than 35 sanctioned barbecue contests, with two grand champion awards, four reserve champions, and several top 10 finishes. He was runner-up in the 2015 season of Chopped: Grill Masters on Food Network and in 2019 won Food Network Canada’s Firemasters.
Pitmaster Hays and former ESPN radio host Golic deliver recipes as flavorful as they are uplifting in this tribute to ‘the healing power of BBQ.’  … This is sure to fire up backyard cooks. (Publishers Weekly)