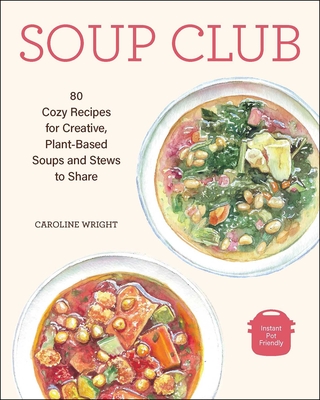 After a devastating brain cancer diagnosis, Caroline Wright told some new friends she was craving homemade soup, then found soup on her doorstep every day for months. She survived with a deep gratitude for soup and her community. In thanks and in their honor, she decided to start a weekly soup club delivering her own original healthful soup recipes to her friend’s porches. Caroline’s creative spirit and enthusiasm spread, along with the word of her club, and she soon was building a large community of soup enthusiasts inspired by her story.

Soup Club is unlike any other soup book. Caroline’s collection of recipes along with artwork, photography, and haiku from her members, tell a moving story of community, love, and health at its center. This unique cookbook proves that soup can be more than a filling meal, but also a mood and a feeling. Every soup can be made on the stove top and Instant Pot. The recipes are all vegan and gluten-free and include:
Caroline Wright is a cookbook author, former food television producer and veteran of Martha Stewart Omnimedia. Her recipes and articles appear regularly online and in national lifestyle publications, including Bon Appetit, Food and Wine, Food Network, Every Day with Rachael Ray, The Kitchn, and Food52. Wright is the author of four cookbooks that range from cakes to Catalan cuisine, though her passion for community and storytelling is woven throughout each book. Her terminal brain cancer diagnosis in 2017 shifted her career to focus on her health and young sons, for whom she also authored the noteworthy children’s book, Lasting Love, about her enduring love after death. She lives in Seattle, Washington with her family.

Willow Heath is a second-generation artist and first-time cookbook illustrator. She teaches illustration, watercolor, and portrait art at numerous Seattle schools, including Gage Academy of Art and Pratt Fine Arts Center. She and Caroline worked together on Caroline’s picture book, Lasting Love. Instagram @willowheath willowheath.com
“I love Soup Club not only for the creative recipes that celebrate vegetables and the beautiful paintings of them, but especially for the story of how it came to be. Caroline Wright’s inspiring story that began with cancer and ended with community compelled me to make soup for others. What better way to thank people for their kindness. And the recipes do work!” (Deborah Madison)