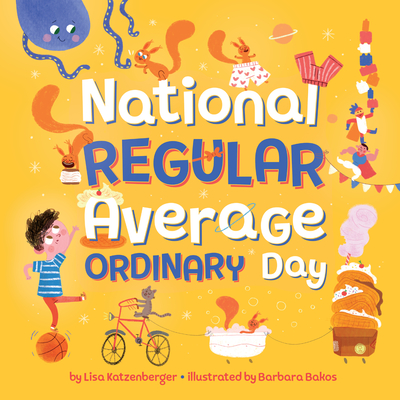 
On Our Shelves Now
Even the regular, average, ordinary days can be celebrated with this charming picture book!

Peter does not like being bored, so he comes up with a way to have some festive fun--he'll celebrate a different holiday each day! He even rates them on a scale of 1 to 10. But when he wakes up one morning to discover there isn't any holiday, he realizes he'll have to take matters into his own hands and make up his own! That's easier said than done, though, and nothing seems to go right--until Peter realizes that even a regular, average, ordinary day can be something worth celebrating.
As the youngest of eight siblings, Lisa Katzenberger (she/her) has been making up stories to entertain herself since she was a child. She loves to write books that make children laugh, escape, and dream. Lisa lives near Chicago with her family in a 100-year-old Victorian house with sloping floors and the tiniest bathroom you've ever seen. When she's not writing or taking care of her kids, she spends way too much time on Twitter as @FictionCity.

Barbara Bakos (she/her) grew up in a suburb of Budapest next to a little forest. She graduated as an animation director at the Moholy-Nagy University of Art and Design Budapest and began working as an art director and designer for a television series and some short films, though she always knew she wanted to spend more time as an illustrator. She now lives between England and Hungary, and misses her big ginger cat when she is not with her, along with her Johnny Cash discs.