Ready for Launch: An Astronaut's Lessons for Success on Earth (Hardcover) 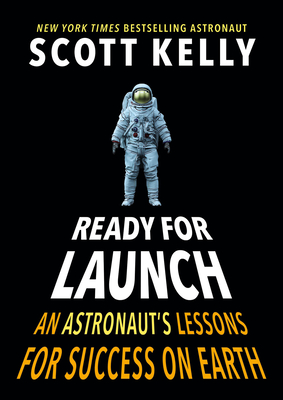 Ready for Launch: An Astronaut's Lessons for Success on Earth (Hardcover)


Usually Ships in 1-5 Days
Using ten life-changing moments from his path to space, astronaut Scott Kelly shares his advice for mastering fear and failure and turning our daily struggles into rocket fuel for success—the perfect gift for graduations and other milestone moments!

In this insightful and funny read, Scott Kelly shares how a distracted student with poor grades became a record-breaking astronaut and commander of the International Space Station.

People think that astronauts are always perfect. "Failure's not an option," right? But as Scott shares in his deeply intimate book, he believes that it's our mistakes and challenges that have the potential to lead to greatness. Not everyone's road to achievement is a straight line. Most of us need to navigate a bumpier road full of obstacles to get where we want to be.

Scott’s story is for everyone who believes that shooting for the stars is beyond their reach!
SCOTT KELLY is a NASA astronaut best known for spending a record-breaking year in space. He is a former US Navy fighter pilot, test pilot, and veteran of four spaceflights. Kelly commanded the space shuttle Endeavour in 2007 and twice commanded the International Space Station. He lives in Houston, Texas. You can follow him on Facebook at NASA Astronaut Scott Kelly, and on Instagram and Twitter at @StationCDRKelly. Visit him at scottkelly.com.
"An inspiring, energizing guide to life illustrated by space anecdotes." —Kirkus Reviews

"Readers from all walks of life will be able to take away nuggets of inspiration to envision their ambitions as realistic possibilities." —Shelf Awareness