Rise of the Cajun Mariners: The Race for Big Oil (Paperback) 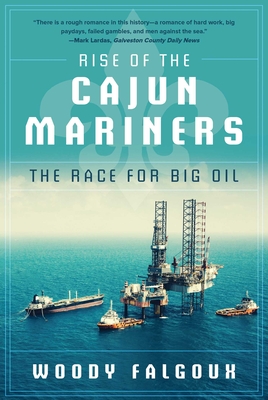 Rise of the Cajun Mariners: The Race for Big Oil (Paperback)


On Our Shelves Now
The story of four families of Cajun boatmen and their rise from trappers and shrimpers to mega-millionaires.

Rise of the Cajun Mariners documents an untold piece of American history—the beginnings of what is now the global, multibillion-dollar marine oil and gas industry. In addition, it gives an insightful insider account of one of America’s only truly distinctive cultures—the Cajuns.

The book tells the story through the Cajun boatmen who drive the boats that supply and move the men who work the offshore platforms. The book follows four of these French-speaking trailblazers as they scrape to buy and build their first boats and struggle toward success. Their success stories will appeal to any believer in the American dream. But it is also a candid account of a wild time in a rough, vital business.

Most of the characters are as flawed as they are dynamic. While they are master seamen, they lead a lifestyle that, for many of them, is as much about drinking and whoring as it is about seamanship and deal-making. The seedy side of their business adds complexity to their story and makes the tale especially human.

Rise of the Cajun Mariners is a fast-paced tale about the rapid evolution of a worldwide industry, the modernization of a culture, and the deliverance of four fascinating families.
Woody Falgoux writes and practices law in Thibodaux, Louisiana. He is the author of One Dream: The NFL and The Miracle of St. Genevieve: Vatican II and the Victory of Faith.
“A good book opens up an entire world to the reader. Cajun Mariners does that and more—it opens your mind to a kind of life few of us know anything about. It puts you out in the Gulf facing a hurricane, and it puts you on the Mississippi River in a fog so thick it blankets sounds, and it’s about men working in the field create new technology. In the end it’s about guts and how a way of life changed.” —John M. Barry, author of Rising Tide: The Great Mississippi Flood of 1927 and How It Changed America

“Falgoux unsentimentally reveals the seamy underside of the oil patch, yet you admire the resilience of the men who worked there. There is a rough romance in this history—a romance of hard work, big paydays, failed gambles and men against the sea.” —Mark Lardas, the Galveston County Daily News

“Cajun Mariners is not fiction, but reads as smoothly and colorfully as a fully conceived novel. . . . Drawing on ingenuity and determination, these four families created a worldwide industry. With nothing more than street smarts, or shall we say swamp smarts, these gutsy men repeatedly cleared obstacles.” —Scott Naugle, Biloxi SunHerald

“Peppered with true-life anecdotes of oilfield life, by oilfielders themselves, Rise of the Cajun Mariners is a one-of-a-kind glimpse into the lives touched by the industry as well as the industry itself.” —Midwest Book Review

“While Falgoux’s book doesn’t omit the darker side of dealing with big oil and doing politics in Louisiana, it contains enough sly Cajun stories to entertain anyone.” —Reese Vaughn, the Victoria Advocate

“A terrific job of capturing the gritty beginnings of the oilfield boat business and the extravagantly interesting characters who founded it.” —Ken Wells, author of Crawfish Mountain and Meely Labauve

“Falgoux tells a colorful tale of four entrepreneurs from the bayou who made their mark in the offshore oil and gas business. This Cajuns, with innovation, determination, and risk, transformed the boat business in south Louisiana into a mega industry that has left its mark on the economy and the culture of the gulf coast.” —Jason P. Theriot, author of American Energy, Imperiled Coast: Oil and Gas Development in Louisiana’s Wetlands