The Liar's Guide to the Night Sky: A Novel (Paperback) 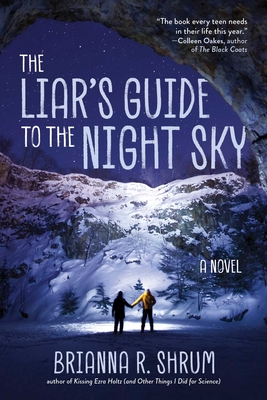 The Liar's Guide to the Night Sky: A Novel (Paperback)

It's no one’s fault that Hallie Jacob is alone. That her grandpa got sick half a world away and so her parents yanked her to Colorado the last semester of her senior year. That career-wise, she’s specialized in fighting fire, and now she’s surrounded by ice, snow, and a thousand cousins she’s half-banned from hanging around with. But that’s what's happened. That's what her December looks like.

On one big family weekend in the freaking tundra, Hallie sneaks off with those cousins to an abandoned ski slope. But they get caught in a random mudslide, and what started as a Secret Bonfire Party goes in a Potential Donner Party direction real fast. With some cousins in desperate need of medical attention, Hallie leaves their camp for help—and is surprised when Jonah Ramirez (her cousin's extremely off-limits—absurdly hot—best friend) joins her.

Facing paralyzing temperatures, sharp-toothed animals strong enough to survive a climate with hardly any water or air, and weather phenomena so wicked they’ll wreck a mountain before you can blink, Jonah and Hallie have no choice but to trust each other as they search for the way to town to send help back to their stranded friends and family. And THAT may be more impossible, even, than making it out alive.
Brianna R. Shrum has been writing since she could scrawl letters. She digs all things bookish, geeky, superhero-y, gamer-y, magical, and strange. You can usually find her writing under her Harry Potter tree, and drinking chai (which she holds as proof of magic in the world.) She is also the author of Kissing Ezra Holtz (And Other Things I Did for Science), How to Make Out, The Art of French Kissing, and Never Never. She lives in a Charlotte suburb in South Carolina with her favorite people.
Praise for The Liar's Guide to the Night Sky

"The Liar's Guide to the Night Sky is Shrum's best book to date; a survival tale lit with sparks. A winter thriller that combines witty dialogue with a slow-burning romance, Liar's Guide is the book every teen needs in their life this year. Shrum's plot hurtles forward unceasingly, and even the coldest readers will find their hearts lit by the romance between Hallie and Jonah." —Colleen Oakes, author of The Black Coats

"As ever, Shrum, author of Kissing Ezra Holtz (and Other Things I Did for Science), creates characters who are notable for their complex identities: Afro-Latino Jonah is a pansexual aromantic, while bisexual Hallie’s complicated relationship with her parents enables a deeper exploration of Jewish cultural norms. This clear-eyed examination of trust, sex, and family dynamics is enhanced by vivid, lucid prose and a thrilling plot." —Publishers Weekly

“Realistic and will resonate with many teens. Give this to readers who love witty, humorous love stories mixed with STEM.” —Booklist

“Predictable hate-becomes-love romance is given new life by an inclusive cast. . . . Worth picking up.” —Kirkus Reviews

Praise for The Art of French Kissing

"Fun, flirty, foodie, and filled with way more heat than your average kitchen, The Art of French Kissing has all the ingredients for a perfect summer romance!" —Dahlia Adler, author of Behind the Scenes

"I ate up this hate-to-love-and-back-again romance! If you love Top Chef but wish more of the show was focused on the romance and rivalries behind the scenes, you'll eagerly devour The Art of French Kissing. Like the best sweet and savory pastries, Carter and Reid deliver both sugar and spice." —Amy Spalding, author of The Summer of Jordi Perez (and the Best Burger in Los Angeles)

"This meet-cute romance stands out thanks to the nuanced characters and subtle treatment of bigger issues such as race, gender, and money (Carter's family flirts with poverty). Carter's insecurities about her culinary skill will resonate with any girl who has aspirations in a field dominated by males, and a sensitive sex scene models for readers what a consensual relationship looks like. A full cast of diverse characters, including Indian-American competitors, Carter's lesbian best friend, and Reid himself, who identifies as queer, are portrayed three-dimensionally, but Shrum's (How to Make Out, 2016, etc.) greatest accomplishment may be the intricate and mouthwatering descriptions of each dish. A thoughtful and delicious romance." —Kirkus Reviews