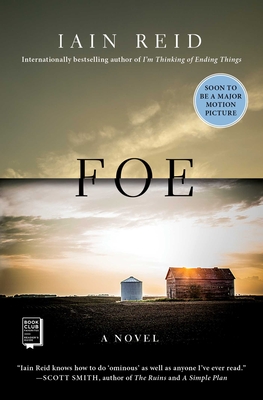 
On Our Shelves Now
“Foe is a tale of implacably mounting peril that feels all the more terrifying for being told in such a quiet, elegantly stripped-down voice. Iain Reid knows how to do ‘ominous’ as well as anyone I’ve ever read.” —Scott Smith, author of The Ruins and A Simple Plan

A taut, psychological mind-bender from the bestselling author of I’m Thinking of Ending Things.

We don’t get visitors. Not out here. We never have.

In Iain Reid’s second haunting, philosophical puzzle of a novel, set in the near-future, Junior and Henrietta live a comfortable, solitary life on their farm, far from the city lights, but in close quarters with each other. One day, a stranger from the city arrives with alarming news: Junior has been randomly selected to travel far away from the farm...very far away. The most unusual part? Arrangements have already been made so that when he leaves, Henrietta won’t have a chance to miss him, because she won't be left alone—not even for a moment. Henrietta will have company. Familiar company.

Told in Reid’s sharp and evocative style, Foe examines the nature of domestic relationships, self-determination, and what it means to be (or not to be) a person. An eerily entrancing page-turner, it churns with unease and suspense from the first words to its shocking finale.
Iain Reid is the author of four previous books, including his New York Times bestselling debut novel I’m Thinking of Ending Things, which has been translated into more than twenty languages. Oscar winner Charlie Kaufman wrote and directed the film adaptation for Netflix. His second novel, Foe, is being adapted for film, starring Saoirse Ronan, with Reid cowriting the screenplay. His latest novel is We Spread. Reid lives in Ontario, Canada. Follow him on Twitter @Reid_Iain.