The Time Traveler's Guide to Medieval England: A Handbook for Visitors to the Fourteenth Century (Paperback) 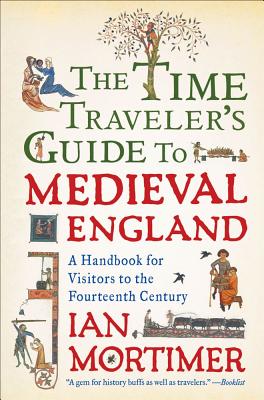 The Time Traveler's Guide to Medieval England: A Handbook for Visitors to the Fourteenth Century (Paperback)


Usually Ships in 1-5 Days
Now in paperback, a literary time machine that takes readers into the sights, smells, and tastes of the fourteenth century—a book that is revolutionary in its concept and startling in its portrayal of humanity.

The past is a foreign country. This is your guidebook. A time machine has just transported you back into the fourteenth century. What do you see? How do you dress? How do you earn a living and how much are you paid? What sort of food will you be offered by a peasant or a monk or a lord? And more important, where will you stay?

The Time Traveler’s Guide to Medieval England is not your typical look at a historical period. This radical new approach shows us that the past is not just something to be studied; it is also something to be lived.

Through the use of daily chronicles, letters, household accounts, and poems of the day, Mortimer transports you back in time, providing answers to questions typically ignored by traditional historians. You will learn how to greet people on the street, what to use as toilet paper, why a physician might want to taste your blood, and how to know whether you are coming down with leprosy.

The result is the most astonishing social history book you’re ever likely to read: revolutionary in its concept, informative and entertaining in its detail, and startling for its portrayal of humanity in an age of violence, exuberance, and fear.
Ian Mortimer is a Fellow of the Royal Historical Society and was awarded the Alexander Prize in 2004 for his work on the social history of medicine. He holds a Ph.D. in history and a higher doctorate from the University of Exeter. He has written five other medieval books, most recently the revolutionary study Medieval Intrigue: Decoding Royal Conspiracies. He has also worked for several archive and historical research organizations in the U.K., where he lives with his wife and children.

www.ianmortimer.com
“In this compelling volume, Mortimer transports his readers. . . . Gives readers a seamless sense of being there. . . . An impressive accomplishment, turning 600 years of history transparent to give 21st-century readers a clear view of medieval life.” –Publishers Weekly

“Mortimer addresses every aspect of medieval life, from the mundane to the bizarre. . . . Travel guides are designed to deliver helpful information about faraway places, but this one gets to the heart of a different time zone.” –The Washington Post

“Chock-full of surprises, this is exceptional social history, compellingly told; there should be ‘travel books’ like this for every century. Start reading, and you won't want to stop.” –Library Journal

"The endlessly inventive Ian Mortimer is the most remarkable medieval historian of our time." --The Times (UK)