Gods in Shackles: What Elephants Can Teach Us About Empathy, Resilience, and Freedom (Paperback) 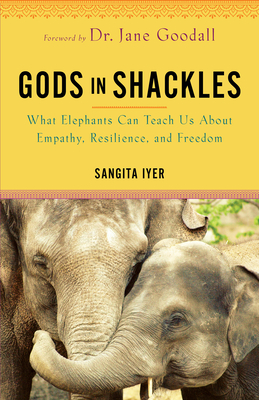 Gods in Shackles: What Elephants Can Teach Us About Empathy, Resilience, and Freedom (Paperback)


On Our Shelves Now
With a foreword by Jane Goodall, this moving memoir follows a successful journalist and filmmaker who felt like something was missing in her life as she finds her purpose in advocacy for the Asian elephants in her childhood home town of Kerala, India.

"The greatness of a nation and its moral progress can be judged by the way its animals are treated." - Mahatma Gandhi

Elephants are self-aware, conscious beings. They can feel and grieve the loss of both elephants and humans. But despite all empathy that elephants shower on humans, we continue to inflict pain and suffering on these caring, sentient beings.

In 2013 Sangita Iyer visited her childhood home of Kerala, India. Over 700 Asian elephants live in Kerala, owned by individuals and temples that force them to perform in lengthy, crowded, noisy festivals, abusing and shackling these animals they claim to revere for tourists and money.

When Sangita found herself in the presence of these divine creatures and witnessed their suffering first hand, she felt a deep connection to their pain. She too had been shackled and broken for too long-to her patriarchal upbringing in India, to the many "me too" moments in her work life that were swept under the rug, to the silence. Now she would speak out for the elephants and for herself. And she would heal alongside them.

This sparked the creation of her award winning documentary of the same name and a new purpose in this life for both Sangita and the elephants.
Sangita Iyer is an Indian Canadian broadcast journalist, writer, biologist and documentary filmmaker. She is known for her advocacy on wildlife conservation, especially for wild elephants, and for exposing the atrocities against Asian elephants by religious institutions. She is the founding executive director and president of the Voice for Asian Elephants Society, which was created in 2016 with the aim of protecting wild and captive elephants of India. Iyer's debut documentary film, Gods in Shackles, was based on the treatment of captive elephants in Kerala and was nominated at the United Nations General Assembly, featured at the International Film Festival of India (IFFI). She is also a National Geographic explorer and has produced a 26-part short documentary series about Asian elephants, using the National Geographic Society storytelling award.
‘Through Gods in Shackles, Sangita Iyer exemplifies the power we have to make change happen when we fully commit to acting on our passions with courage, commitment, and willingness to adapt in the face of adversity and challenge. Through natural storytelling and compelling writing, Sangita weaves a personal journey of courage and transformation. She invites the reader into her story and the stories of captive elephants, sharing her emotional connections, struggles, and triumphs along the way, revealing the deep disconnects we have in how we live our lives, and how we treat other sentient beings. Through this engaging story, Sangita Iyer helps us recognize how interdependence, community, diversity, and being open to adaptation and emergence create a transformative change for a sustainable future.’ — Dr Liza Ireland, Executive director of Changing Climates Consulting, British Columbia, Canada

‘Sangita Iyer’s personal journey is a wonderful model for how we should, and must, “rewild” ourselves and learn to coexist peacefully with the fascinating, non-human animals with whom we share our magnificent planet. My hope is that self-centred humans will come to realize that the better we treat other animals, the better we will treat ourselves. It’s a win-win for all. Some call the Anthropocene “the age of humanity”. In reality, it is “the rage of inhumanity”. And if we don’t change our anthropocentric destructive ways, we will eventually live in an impoverished and very lonely world. Future generations will inherit the messes we leave them, and this surely isn’t fair to them and to their children. Gods in Shackles is a courageous, riveting, and inspirational book that deserves a global audience, and I will do all I can to spread the word far and wide.’ — Marc Bekoff, PhD, American ecologist, biologist, ethologist, and writer

‘When a person stands up for injustice, the plight is infectious. Sangita’s passion is infectious. The good people of this world came her way and helped because they believed in what she was doing. Sangita made Gods in Shackles and the VFAES happen, and bravo to her. I would thoroughly recommend this inspiring and uplifting book. The subject matter is brutal, but it gives me hope that humans can still make the world a better place if we change our ways and take a stand. Education and solidarity are the way forward. Excellent read and a fantastic journey!’ — Carla Kovach, Author of the bestselling Detective Gina Harte series

‘Thought-provoking and very upsetting at times, particularly because that these tortures are under the semblance of religion. This wonderful book is deep and full of facts and emotions. I particularly resonated with the frequent parallels to the elephants’ plight and Sangita’s personal life experiences, both physical and mental. It seems incongruous and wrong that nature should bow to mankind, especially this most glorious and intelligent species—the majestic yet gentle elephant. Sangita is a determined, cause-driven, and passionate advocate whom I admire enormously. After a horrendous accident during which she was incapacitated for months, she becomes more and more determined and likens her suffering to those of the horribly abused elephants, particularly those in the temples. The book charts the making of her amazing film Gods in Shackles—an eye-opening, heartbreaking account of the barbaric cruelty inflicted on these naturally gentle giants to “break their spirit” and make them controllable to humans. I challenge anyone who has had the privilege to see these glorious animals in their natural habitat, in their female-orientated herds, to not be moved and become determined to support Sangita and her mission.’ — Rula Lenska, British actress and model

‘Sangita Iyer possesses an abundance of courage, vigour, tenacity, and charm. It is the combination of these qualities which endures in the dynamic achievements of this outstanding author who is a dedicated campaigner for elephant protection. Sangita has demonstrated, time and again, that nothing stands in her way, dispelling untruths and sweeping away injustices so that egotistical and political barriers can crumble leading to change. This phenomenal, trailblazing book reminds us that humans need to self-heal in order to fully play our role in forming a synergistic coexistence with nature and animals. What we do to other species reverberates back to us. There is an urgency, therefore, to end the weeping of elephants and evolving of humans so that we all hold out hands with respect and tender love. Then elephants, and all animals, will be free from shackles and chains. In this outstanding book, Sangita Iyer is the worthy voice of elephants, the translator of their wisdom, of the mapping of their consciousness itself, and how it relates to us mere humans.’ — Margrit Coates, World-renowned author, healer, and interspecies communicator

‘A painful and extensive injury becomes the occasion for Iyer’s understanding of the horrific plight of the temple elephants. Her soul’s understanding that the elephants are holy beings requires her to work on their behalf to free them from the literal ongoing torture of their ceremonial lives in captivity in the name of religion. The book weaves Iyer’s story, the elephants’ story, and India’s extreme contradictions as modern life and its desperations devastate the ancient traditions.’ — Deena Metzger, Author of A Rain of Night Birds and co-editor of Intimate Nature: The Bond Between Women and Animals

‘From an early age, Sangita felt a deep affinity with Asian elephants. Many years later, having long since moved to Canada, she became aware that the temple elephants used in religious ceremonies in her native India are horribly abused, even tortured. It became her mission to shine a light on this abuse. Here, she tells a heartfelt tale of creating and sharing the award-winning documentary film, Gods in Shackles, and draws parallels between her own inner search for spiritual freedom and her work to free her soul animals from the horrendous conditions of their captive lives. Along the way, Sangi shares with us glimpses of her beloved Indian culture and the wonder of the non-human world she finds even in the midst of cities. If you love our non-human brothers and sisters and find the Law of Attraction compelling, then this book is for you.’ — Dr Robert Kull, Author of Solitude: Seeking Wisdom in Extremes—A Year Alone in the Patagonia Wilderness