Everything You Believe Is Wrong (Paperback) 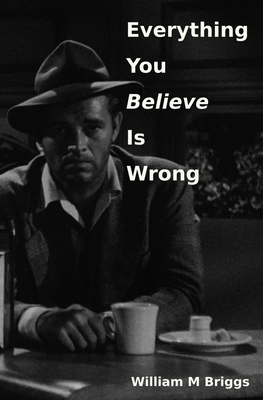 Everything You Believe Is Wrong (Paperback)

If you are an Expert, professional, bureaucrat, teacher, professor, Democrat or Republican, liberal, progressive or conservative, consider yourself in any way in the educated classes, the odds are high that everything you believe is wrong.

Not everything. Not simple things. Only the most important things. If you are in the majority, then a great deal of what you hold true about the world and of life is false.

Here is a small sample of things that majority of educated believe are false, but which are instead true: Science cannot answer every question put to it; It is not always right to correct a wrong; There is no wisdom in crowds; A consensus among elite academics does not prove the belief of the elite academics is true; That you are offended is irrelevant to whether a proposition is true or false; Defining yourself as your sexual desire is nonsensical; Voting does not make the majority position right and the minority position wrong; Voting is a leading cause of discord; Democracy is rarely to be desired; You cannot choose to believe you do not have free will; God exists.

These are only some of the ideas and arguments explored in this book. The majority, and that means likely you, are wrong about all of them. This is no idle claim. It will be proved chapter by chapter.

Every bad or invalid or unsound argument contains a fallacy or mistake in thinking. Nobody knows the complete list of ways thought can go wrong, and it has even been surmised such a list is endless. History supports this contention. There is ample reason to believe the human race is congenitally insane.

Some mistakes are more common than others. Every age has its own favorite forays into fiction, driven by fashion, fad, and fantasy, all of which are enforced by the culture's self-appointed Watchers. The balance of truth versus error shifts in time, yet the current age is more eager than average to ferret away any shiny object it finds and call it precious.

Fallacies therefore have tremendous inertia. Some mental misconstructions are permanent fixtures. I have evocative and memorable nicknames, at least for speakers of English, of the most popular and important fallacies of our day. We step through each, showing how it is false.

Way Fallacy; many, many others, including the ever-popular Meta Fallacy. This is a fallacy that says a thing is true because it is a fallacy. Strange as it seems, it is most convincing.