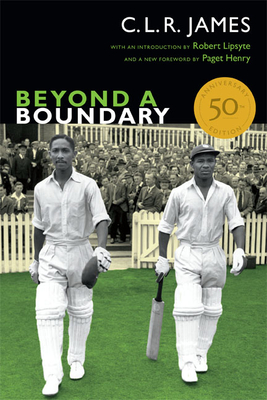 
Usually Ships in 1-5 Days
This new edition of C. L. R. James's classic Beyond a Boundary celebrates the fiftieth anniversary of one of the greatest books on sport and culture ever written.

"Beyond a Boundary . . . should find its place on the team with Izaak Walton, Ivan Turgenev, A. J. Liebling, and Ernest Hemingway."-Derek Walcott, The New York Times Book Review

"As a player, James the writer was able to see in cricket a metaphor for art and politics, the collective experience providing a focus for group effort and individual performance. . . . In] his scintillating memoir of his life in cricket, Beyond a Boundary (1963), James devoted some of his finest pages to this theme."-Edward Said, The Washington Post

"A work of double reverence-for the resilient, elegant ritualism of cricket and for the black people of the world."-Whitney Balliett, The New Yorker

"Beyond a Boundary is a book of remarkable richness and force, which vastly expands our understanding of sports as an element of popular culture in the Western and colonial world."-Mark Naison, The Nation

"Everything James has done has had the mark of originality, of his own flexible, sensitive, and deeply cultured intelligence. He conveys not a rigid doctrine but a delight and curiosity in all the manifestations of life, and the clue to everything lies in his proper appreciation of the game of cricket."-E. P. Thompson, author of The Making of the English Working Class

"Beyond a Boundary is . . . first and foremost an autobiography of a living legend-probably the greatest social theorist of our times."-Manning Marable, Journal of Sport & Social Issues

"The great triumph of Beyond a Boundary is its ability to rise above genre and in its very form explore the complex nature of colonial West Indian society."-Caryl Phillips, The New Republic

C. L. R. James (1901-89), a Trinidadian historian, political activist, and prolific writer, was one of the twentieth century's most important intellectuals. He is the author of a renowned study of the Haitian Revolution, The Black Jacobins (1938), and a play, Toussaint Louverture: The Story of the Only Successful Slave Revolt in History (1934), which is published by Duke University Press.