Getting Out of the Mud: The Alabama Good Roads Movement and Highway Administration, 1898–1928 (Paperback) 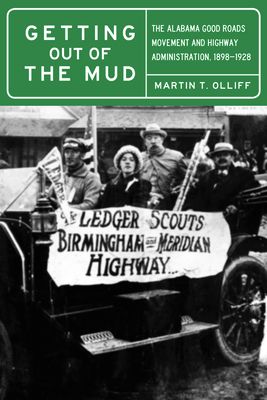 Getting Out of the Mud: The Alabama Good Roads Movement and Highway Administration, 1898–1928 (Paperback)


Usually Ships in 1-5 Days
Recounts the history of the Good Roads Movement that arose in progressive-era Alabama, how it used the power of the state to achieve its objectives of improving market roads for farmers and highways for automobiles

Getting Out of the Mud: The Alabama Good Roads Movement and Highway Administration, 1898–1928 explores the history of the Good Roads Movement and investigates the nature of early twentieth-century progressivism in the state. Martin T. Olliff reveals how middle-class reformers secured political, economic, and social power not only by fighting against corporate domination and labor recalcitrance but also by proposing alternative projects like road improvement and identifying the interests of the rising middle class as being the most important to public interest.

With the development of national markets in the late nineteenth and early twentieth centuries, Americans began to regard the nation as a whole, rather than their state or region, as the most important political entity. Many Alabamians wished to travel beyond their local communities in all seasons without getting stuck in the mud of rudimentary rutted dirt roads. The onset of the automobile age bolstered the need for roadmaking, alerting both automobilists and good roads advocates to the possibility of a new transportation infrastructure. The Good Roads Movement began promoting farm-to-market roads, then highways that linked cities, then those that connected states. Federal matching funds for road construction after 1916 led state and federal governments to supplant the Good Roads Movement, building and administering the highway system that emerged by the late 1920s.

Olliff’s study of how Alabamians dealt with strained resources and overcame serious political obstacles in order to construct a road system that would accommodate economic growth in the twentieth century may offer clues to the resurrection of a similar strategy in our modern era. Many problems are unchanged over the hundred years between crises: Alabamians demand good roads and a government that has the capacity to build and maintain such an infrastructure while, at the same time, citizens are voting into office men and women who promise lower taxes and smaller government.
Martin T. Olliff is a professor of history and the director of the Wiregrass Archives at Troy University Dothan Campus. He is also the editor of The Great War in the Heart of Dixie: Alabama in World War I and an editorial board member of both The Alabama Review: A Quarterly Journal of Alabama History and Provenance: Journal of the Society of Georgia Archivists.
“In this deeply researched and engagingly written book, Troy University-Dothan historian Martin T. Olliff examines the myriad obstacles encountered by good roads advocates as they sought, in his words, to pull Alabamians out of the mud.”
—Alabama Review
“Olliff weaves a unique combination of history, sociology, political science, and economics to create a three-dimensional fabric.”
—David O. Whitten, author of Andrew Durnford: A Black Sugar Planter in the Antebellum South and coauthor of The Birth of Big Business in the United States, 1860–1914: Commercial, Extractive, and Industrial Enterprise