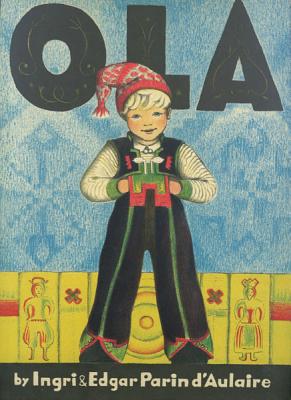 Ola is the enchanting story of a dauntless Norwegian boy who goes skiing one day and has many unusual adventures before returning home. He meets new friends, joins a merry wedding party, encounters a howling dragon, and learns bits of folklore from fishermen in the far north while pulling codfish from the icy waters.

This delightfully illustrated book is at once a true glimpse of life as it once was in Norway and a tribute to Ingri and Edgar Parin d’Aulaire’s zest for living.

Known for their vibrant and imaginative interpretations of Scandinavian folklore, Greek and Norse mythology, and American history, the books of Ingri and Edgar Parin d’Aulaire have entertained readers for more than seventy-five years. The couple received the Caldecott Medal for their book Abraham Lincoln and were later awarded the Regina Medal for their distinguished contribution to children’s literature.

"A picture of Norway . . . so complete and vivid that a reader of any age can gain from the book real knowledge and understanding of the country." —New York Times


"American children’s literature is much richer than it ever could have been without Ingri and Edgar [d’Aulaire]." —Horn Book


"Ola can’t be told, it has to be experienced." —Barbara Bader, Kirkus Reviews


"A book of rare quality and significance." —A. C. Moore, Atlantic Bookshelf