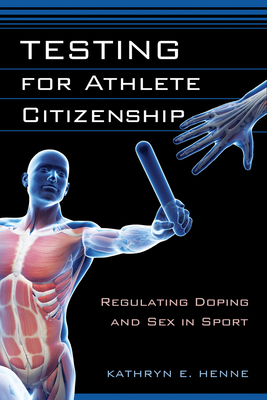 
Usually Ships in 1-5 Days
Incidents of doping in sports are common in news headlines, despite regulatory efforts. How did doping become a crisis? What does a doping violation actually entail? Who gets punished for breaking the rules of fair play? In Testing for Athlete Citizenship, Kathryn E. Henne, a former competitive athlete and an expert in the law and science of anti-doping regulations, examines the development of rules aimed at controlling performance enhancement in international sports.  As international and celebrated figures, athletes are powerful symbols, yet few spectators realize that a global regulatory network is in place in an attempt to ensure ideals of fair play. The athletes caught and punished for doping are not always the ones using performance-enhancing drugs to cheat. In the case of female athletes, violations of fair play can stem from their inherent biological traits. Combining historical and ethnographic approaches, Testing for Athlete Citizenship offers a compelling account of the origins and expansion of anti-doping regulation and gender-verification rules.
Drawing on research conducted in Australasia, Europe, and North America, Henne provides a detailed account of how race, gender, class, and postcolonial formations of power shape these ideas and regulatory practices. Testing for Athlete Citizenship makes a convincing case to rethink the power of regulation in sports and how it separates athletes as a distinct class of citizens subject to a unique set of rules because of their physical attributes and abilities.

KATHRYN E. HENNE is a lecturer in sociology at the University of Melbourne.
"With sophisticated analysis and descriptive prose, Testing for Athlete Citizenship offers provocative arguments. Author Kathryn Henne breaks new ground in showing that testing practices are not just about catching 'cheaters,' but are implicated in corporal, gendered, economic, and postcolonial ideologies."
— Mary G. McDonald

"A masterpiece of hybrid governance. This book chronicles with nuance the entire global history of a regulatory regime, yet through a micro lens, through the eyes and bodies of colonized athletes. A landmark of gendered and racialized problematics of fair play."
— John Braithwaite

"Even though anti-doping regulation and gender verification testing were not implemented until the late 1960s, the ways in which Henne demonstrates how the definition of athlete citizenship these practices circumscribed embedded older notions of ideal athleticism suggest her conceptualization of athletes as a specific caste of citizens could intriguingly influence scholars of sport studying a range of time periods."
— Sport in American History

"Henne expands beyond an examination of doping control and looks more broadly at other forms of biomedicalized surveillance."
— Journal of Sport History

"In Testing for Athlete Citizenship, Henne achieves a difficult task in providing a compelling, thought-provoking analysis of an intangible gate-keeping structure in sport, based on the concept of ‘athlete citizenship.’"
— Sport, Ethics and Philosophy

"In Testing for Athlete Citizenship Henne achieves a difficult task in providing a compelling, thought-provoking analysis of an intangible gate-keeping structure in sport, based on the concept of ‘athlete citizenship.’"
— Sport, Ethics and Philosophy