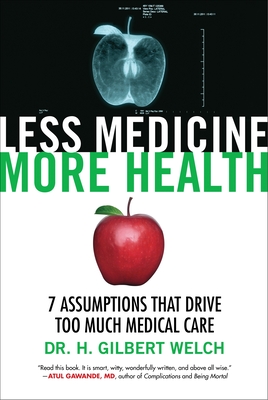 You might think the biggest problem in medical care is that it costs too much. Or that health insurance is too expensive, too uneven, too complicated—and gives you too many forms to fill out. But the central problem is that too much medical care has too little value.

Dr. H. Gilbert Welch is worried about too much medical care. He doesn’t deny that some people get too little medical care—rather that the conventional concern about “too little” needs to be balanced with a concern about “too much”: too many people being made to worry about diseases they don’t have and are at only average risk to get; too many people being tested and exposed to the harmful effects of the testing process; too many people being subjected to treatments they don’t need or can’t benefit from. The American public has been sold the idea that seeking medical care is one of the most important steps to maintain wellness. Surprisingly, medical care is not, in fact, well correlated with good health. More medicine does not equal more health; in reality the opposite may be true.

In Less Medicine, More Health, Dr. Welch pushes against established wisdom and suggests that medical care can be too aggressive. Drawing on his twenty-five years of medical practice and research, he notes that while economics and lawyers contribute to the excesses of American medicine, the problem is essentially created when the general public clings to these powerful assumptions about the value of tests and treatments—a number of which are just plain wrong.

By telling fascinating (and occasionally amusing) stories backed by reliable data, Dr. Welch challenges patients and the health-care establishment to rethink some very fundamental practices. His provocative prescriptions hold the potential to save money and, more important, improve health outcomes for us all.
Dr. H. Gilbert Welch is an academic physician, a professor at Dartmouth Medical School, and a nationally recognized expert on the effects of medical testing. He has been published in the Los Angeles Times, New York Times, Washington Post, and Wall Street Journal, and has appeared on Today. Dr. Welch is the author of three previous books, including the highly acclaimed Overdiagnosed. He lives in Thetford, Vermont.
“Avoiding medical jargon, Welch speaks directly to the layperson and focuses on certain assumptions that have increased consumption in a market-driven society; some of which have become so ingrained by popular media that refuting them seems downright scandalous… Welch’s words, though wise beyond money, border on sacrilege in a country of generally healthy people who have developed an expensive health-care habit and who are expected to support a lucrative health-care industry. Welch’s conversational style makes his prescription for better health an easy pill to swallow.”
—Booklist, starred review

“A bright, lively discussion of the excesses of medical care to which patients often unwittingly go due to certain false assumptions… Welch demonstrates the flaws in these assumptions. His stories involve the risks, uncertainties and harms of cancer screenings, treatments for heart disease, drugs, medical devices and surgical procedures. He makes an especially strong case for the risks of mass screenings for cancer—the fear, the false alarms, the overdiagnoses and the resulting overtreatments. Vivid images make what could be discouragingly technical quite understandable… Welch's engaging style and touches of humor make this an easy read, and the facts he presents make a convincing case.”
—Kirkus Reviews

“Read this book. It is smart, witty, wonderfully written, and above all wise. We've overmedicalized life and yet we need medicine throughout our lives. No one explains better when we do, when we don't, and why.”
—Atul Gawande, author of Complications and Being Mortal

“Wise, witty, fascinating and alarmingly persuasive—this is a book everyone should read, especially my doctor.”
—Bill Bryson, author of A Short History of Nearly Everything

“With the style of a trustworthy country doctor, Welch, an academic heavyweight, urges us to reject the allure of reducing all health risks by using the latest technology to gather all the data and to fix the problems sooner rather than later. Showing the dangers of our ill-informed enthusiasm for medicine, he brilliantly builds the case for respecting its power and limitations: to seek it when ill and all but avoid it when healthy.”
—Victor M. Montori, MD, Professor of Medicine, Mayo Clinic

“Gil Welch's latest book shows us exactly how too much medical care can be harmful and even deadly.  This is a needed corrective to the American attitude that the more screening and testing, the healthier we will be.”
—Marcia Angell, author of The Truth About Drug Companies