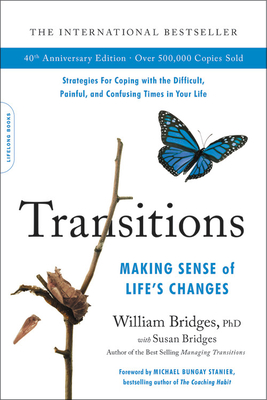 
Usually Ships in 1-5 Days
Celebrating 40 years of the best-selling guide for coping with life's changes, named one of the 50 all-time best books in self-help and personal development -- with a new Discussion Guide for readers, written by Susan Bridges and aimed at today's current people and organizations facing unprecedented change

First published in 1980, Transitions was the first book to explore the underlying and universal pattern of transition. Named one of the fifty most important self-help books of all time, Transitions remains the essential guide for coping with the inevitable changes in life.
Transitions takes readers step-by-step through the three perilous stages of any transition, explaining how each stage can be understood and embraced. The book offers an elegant, simple, yet profoundly insightful roadmap to navigate change and move into a hopeful future:
William Bridges, PhD (1933-2013) was a preeminent authority on change and transition whose pioneering research provided a methodology and common language to guide organizations and individuals during the significant transitions that accompany a major change. As the founder of William Bridges Associates and a globally recognized speaker, author, and consultant, he advised individuals and organizations on how to deal productively with change. He was the author of ten books, including the bestselling Managing Transitions, Transitions, and The Way of Transition. With the publication of his groundbreaking book JobShift in 1994, William accurately predicted the explosive growth of self-employment, helping people understand how to prepare for a world in which secure jobs would be increasingly scarce. He later published Creating You & Co., which guides individuals on how to take charge of their career while navigating this new world of work. William received degrees from Harvard, Columbia, and Brown Universities, and Ralph Waldo Emerson's pragmatic philosophy heavily influenced his teachings.Susan Bridges is the president of William Bridges Associates and has spent thirty-five years advising executives and leaders in organizations facing significant transitions. She updated and revised the 40th anniversary edition of Transitions and the 25th anniversary edition of Managing Transitions. Susan holds a BA in Speech and MA in Communications, with an emphasis in Neurolinguistics and Neuropsychology, from the University of Colorado. She has served as a Drucker Foundation Mentor, guiding the business leaders of tomorrow. As a former board member for the Institute of Management Consultants, she developed the first nation-wide mentoring and professional development program for management consultants. She lives in Marin County, CA.