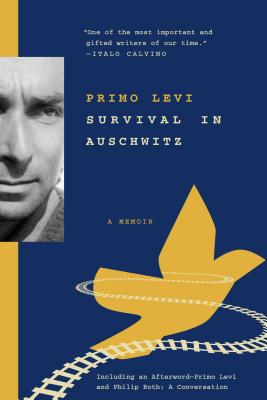 
On Our Shelves Now
The true and harrowing account of Primo Levi’s experience at the German concentration camp of Auschwitz and his miraculous survival; hailed by The Times Literary Supplement as a “true work of art, this edition includes an exclusive conversation between the author and Philip Roth.

In 1943, Primo Levi, a twenty-five-year-old chemist and “Italian citizen of Jewish race,” was arrested by Italian fascists and deported from his native Turin to Auschwitz. Survival in Auschwitz is Levi’s classic account of his ten months in the German death camp, a harrowing story of systematic cruelty and miraculous endurance. Remarkable for its simplicity, restraint, compassion, and even wit, Survival in Auschwitz remains a lasting testament to the indestructibility of the human spirit. Included in this new edition is an illuminating conversation between Philip Roth and Primo Levi never before published in book form.
Born to a Jewish family in Turin in 1919, Primo Levi was trained as a chemist. During World War II, he was arrested as a member of a partisan group and deported to Auschwitz. After the camp’s liberation, he returned to Italy and worked as a chemist, writing only on the side. His first book Survival at Auschwitz was a personal account of his year at the camps. The follow-up memoir The Reawakening cemented Levi as a leading authority on the Holocaust. Other books by Levi include Periodic Table, If Not Now, When?, The Monkey’s Wrench, Other People’s Trades, The Drowned and the Saved, and more. Primo Levi died in 1987 after falling down his apartment’s stairway. Biographers remain divided as to whether his fall was a suicide or an accident.
Italo Calvino One of the most important and gifted writers of our time.

David Caute, New Statesman Survival in Auschwitz is a stark prose poem on the deepest sufferings of man told without self-pity, but with a muted passion and intensity, an occasional cry of anguish, which makes it one of the most remarkable documents I have ever read.

Meredith Tax, The Village Voice More than anything else I've read or seen, Levi's books helped me not only to grasp the reality of genocide but to figure out what it means for people like me who grew up sheltered from the storm.

The Times Literary Supplement (London) Survival in Auschwitz has the inevitability of the true work of art.