The Great Bridge: The Epic Story of the Building of the Brooklyn Bridge (Paperback) 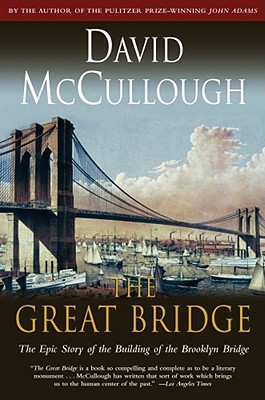 The Great Bridge: The Epic Story of the Building of the Brooklyn Bridge (Paperback)


On Our Shelves Now
The dramatic and enthralling story of the building of the Brooklyn Bridge, the world’s longest suspension bridge at the time, a tale of greed, corruption, and obstruction but also of optimism, heroism, and determination, told by master historian David McCullough.

This monumental book is the enthralling story of one of the greatest events in our nation’s history, during the Age of Optimism—a period when Americans were convinced in their hearts that all things were possible.

In the years around 1870, when the project was first undertaken, the concept of building an unprecedented bridge to span the East River between the great cities of Manhattan and Brooklyn required a vision and determination comparable to that which went into the building of the great cathedrals. Throughout the fourteen years of its construction, the odds against the successful completion of the bridge seemed staggering. Bodies were crushed and broken, lives lost, political empires fell, and surges of public emotion constantly threatened the project. But this is not merely the saga of an engineering miracle; it is a sweeping narrative of the social climate of the time and of the heroes and rascals who had a hand in either constructing or exploiting the surpassing enterprise.
David McCullough (1933–2022) twice received the Pulitzer Prize, for Truman and John Adams, and twice received the National Book Award, for The Path Between the Seas and Mornings on Horseback. His other acclaimed books include The Johnstown Flood, The Great Bridge, Brave Companions, 1776, The Greater Journey, The American Spirit, The Wright Brothers, and The Pioneers. He was the recipient of numerous honors and awards, including the Presidential Medal of Freedom, the nation’s highest civilian award. Visit DavidMcCullough.com.
“After reading David McCullough’s account, you will never look at the old bridge in quite the same way again.”
—Christopher Lehmann-Haupt, The New York Times

"The Great Bridge is a great book. . . . This is the definitive book on the event. Do not wait for a better try: there won't be any."
—Norman Rosten, Newsday

"The Great Bridge is a book so compelling and complete as to be a literary monument. . . . McCullough has written that sort of work which brings us to the human center of the past."
—Los Angeles Times