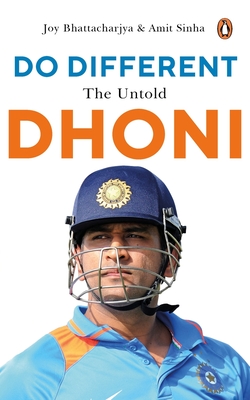 Out of the box thinking, ruthless pragmatism and an innate ability to understand, define and then redefine the game of cricket are probably the hallmarks of Mahendra Singh Dhoni's cricket. From hitting countless sixes in his school ground in the sleepy town of Ranchi to finishing a run chase with another towering six in a World Cup final against Sri Lanka, Dhoni's journey is undoubtedly one of the most iconic of our times. Many have tried to decode his mystique, and yet, every account seems to have fallen frustratingly short of capturing the essence of the man.

Instead, in Do Different, we offer diverse perspectives on the man: from a fellow wicketkeeper and competitor reminiscing on Dhoni's early years; to MSD's first agent with his perspective on the journey of brand Dhoni; to an international fast bowler who played with MSD since his first-class days and then starred for him in the Indian Premier League.

From the matches and moments that defined Dhoni in the IPL, in international cricket and even off the field, to his life beyond the game of cricket, this is your ultimate MSD book.

Amit Sinha (Author)
Amit Sinha is a sports media professional who has been involved with multiple sports in the past few years because of his work, but his heart beats for cricket. A product of the University of Delhi's Ramjas College, he is a keen storyteller, among other things, and loves to tell the not so well-known stories behind some iconic and even non-iconic photographs from the game of cricket on his Twitter handle @RandomCricketP1.


Joy Bhattacharjya (Author)
Joy Bhattacharjya spent many years covering Indian cricket on broadcast for ESPN Star Sports, including MS Dhoni's debut match for India. He then spent 7 seasons as Team Director with the Kolkata Knight Riders worrying about Dhoni and his CSK team. Since then, he has moved on to commenting on Dhoni as an analyst, and can assure everyone that it is a far easier task to talk about Dhoni than plan against him. He also helped organize the first ever FIFA U17 World Cup and currently also runs a professional volleyball league.