The Worst Hard Time: The Untold Story of Those Who Survived the Great American Dust Bowl (Hardcover) 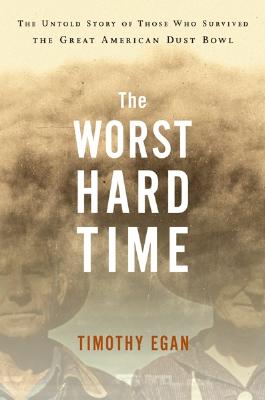 The Worst Hard Time: The Untold Story of Those Who Survived the Great American Dust Bowl (Hardcover)

The dust storms that terrorized the High Plains in the darkest years of the Depression were like nothing ever seen before or since. Following a dozen families and their communities through the rise and fall of the region, Timothy Egan tells of their desperate attempts to carry on through blinding black dust blizzards, crop failure, and the death of loved ones. Brilliantly capturing the terrifying drama of catastrophe, he does equal justice to the human characters who become his heroes, “the stoic, long-suffering men and women whose lives he opens up with urgency and respect” (New York Times). In an era that promises ever-greater natural disasters, The Worst Hard Time is “arguably the best nonfiction book yet” (Austin Statesman Journal) on the greatest environmental disaster ever to be visited upon our land and a powerful reminder about the dangers of trifling with nature.

TIMOTHY EGAN is a Pulitzer Prize–winning reporter and the author of eight other books, most recently The Immortal Irishman, a New York Times bestseller. His book on the Dust Bowl, The Worst Hard Time, won a National Book Award for nonfiction. His account of photographer Edward Curtis, Short Nights of the Shadow Catcher, won the Carnegie Medal for nonfiction. He writes a biweekly opinion column for the New York Times.

[A] fierce, humane account of the dreams and extremes that crashed head on during the nearly decade-long calamity of the Dust Bowl. The New York Times

[A] vivid and gritty piece of forgotten history.
USA Today

"The Worst Hard Time" provides a sobering, gripping account of a disaster whose wounds are still not fully healed today.
Boston Globe

The Worst Hard Time is a haunting work of narrative nonfiction.
The Baltimore Sun

Egan has admirably captured a part of our American experience that should not be forgotten.
The San Francisco Chronicle

Egan is a passionate and accomplished writer...Read this for history, not inspiration or entertainment.
The Denver Post

Egan's account of the Dust Bowl era is a final, terrible rebuke to the policies of America's dying days of frontier expansion.
The Seattle Times

THE WORST HARD TIME is a flat-out masterpiece of historical reportage.
Seattle Post-Intelligencer —