Imposter Syndrome and Other Confessions of Alejandra Kim (Hardcover) 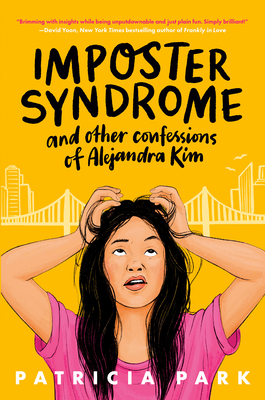 Imposter Syndrome and Other Confessions of Alejandra Kim (Hardcover)


Coming Soon - Available for Pre-Order Now
The award-winning author of Re Jane makes her young adult debut in a funny, poignant, and powerful novel about a multicultural teen struggling to fit into her whitewashed school, her diverse Queens neighborhood, and even her own home as her family reels from the loss of her father.

“...A dazzling YA debut...that is deep, real and scathingly funny.” —Gayle Forman, New York Times best-selling author of IF I STAY.

Alejandra Kim doesn’t feel like she belongs anywhere. At her wealthy Manhattan high school, her súper Spanish name and súper Korean face do not compute to her mostly white "woke" classmates and teachers. In her Jackson Heights neighborhood, she’s not Latinx enough. Even at home, Ale feels unwelcome. And things at home have only gotten worse since Papi's body was discovered on the subway tracks.

Ale wants nothing more than to escape the city for the wide-open spaces of the prestigious Wyder University. But when a microaggression at school thrusts Ale into the spotlight—and into a discussion she didn’t ask for—Ale must discover what is means to carve out a space for yourself to belong.

Patricia Park’s coming-of-age novel about a multicultural teen caught between worlds, and the future she is building for herself, is an incisive, laugh-out-loud, provocative read.
Patricia Park is an assistant professor of creative writing at American University, a Fulbright Scholar in Creative Arts, a Jerome Hill Artist Fellow, and the author of the acclaimed adult novel Re Jane. The Korean American reimagining of Charlotte Brontë's Jane Eyre was named an Editors' Choice by the New York Times Book Review; a Best Book of 2015 by the American Library Association; an O, The Oprah Magazine pick; and an NPR "Fresh Air" pick, among other honors. Her writing has also appeared in the New Yorker, the New York Times, the Guardian, Salon, and others. Patricia lives in Brooklyn, NY, and online at patriciapark.com.
★ “Park’s work paints an educational but entertaining portrait of what it is like to be a person of color in today’s world.... [A] fantastic read.” —School Library Journal, starred review