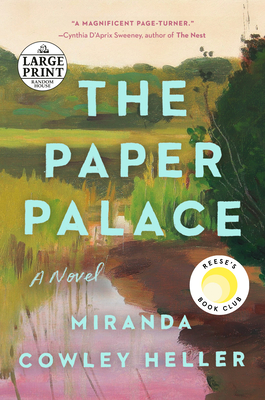 “Elle and her family gather each summer at the ‘Paper Palace’ family cabins; but this one day will be anything but a relaxing vacation retreat. This will be the buzz of book clubs and a perfect traveling companion for summers by the seaside.”
— Pamela Klinger-Horn, Valley Bookseller, Stillwater, MN

THE PAPER PALACE IS:

“Filled with secrets, love, lies and a summer beach house. What more could you ask?”—Parade

“[An] irresistible placement of a complicated family in a bewitching place.” —The New York Times

A story of summer, secrets, love, and lies: in the course of a singular day on Cape Cod, one woman must make a life-changing decision that has been brewing for decades.

“This house, this place, knows all my secrets.”

It is a perfect August morning, and Elle, a fifty-year-old happily married mother of three, awakens at “The Paper Palace”—the family summer place which she has visited every summer of her life. But this morning is different: last night Elle and her oldest friend Jonas crept out the back door into the darkness and had sex with each other for the first time, all while their spouses chatted away inside. Now, over the next twenty-four hours, Elle will have to decide between the life she has made with her genuinely beloved husband, Peter, and the life she always imagined she would have had with her childhood love, Jonas, if a tragic event hadn’t forever changed the course of their lives. As Heller colors in the experiences that have led Elle to this day, we arrive at her ultimate decision with all its complexity. Tender yet devastating, The Paper Palace considers the tensions between desire and dignity, the legacies of abuse, and the crimes and misdemeanors of families.
Miranda Cowley Heller has worked as senior vice president and head of drama series at HBO, developing and overseeing such shows as The Sopranos, Six Feet Under, The Wire, Deadwood, and Big Love, among others. This is her first novel. She grew up spending summers on Cape Cod, and now lives in California.