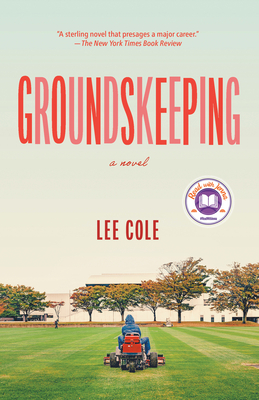 “Set on a small college campus, Groundskeeping follows a young man who moves home and finds himself in a covert relationship with the college’s writer-in-residence. A masterful coming-of-age debut on the messiness of writers’ lives.”
— Lindsay Lynch, Parnassus Books, Nashville, TN

A TODAY SHOW #ReadWithJenna BOOK CLUB PICK • An indelible love story about two very different people navigating the entanglements of class and identity and coming of age in an America coming apart at the seams—this is "an extraordinary debut about the ties that bind families together and tear them apart across generations" (Ann Patchett, best-selling author of The Dutch House).

In the run-up to the 2016 election, Owen Callahan, an aspiring writer, moves back to Kentucky to live with his Trump-supporting uncle and grandfather. Eager to clean up his act after wasting time and potential in his early twenties, he takes a job as a groundskeeper at a small local college, in exchange for which he is permitted to take a writing course.

Here he meets Alma Hazdic, a writer in residence who seems to have everything that Owen lacks—a prestigious position, an Ivy League education, success as a writer. They begin a secret relationship, and as they grow closer, Alma—who comes from a liberal family of Bosnian immigrants—struggles to understand Owen’s fraught relationship with family and home.

Exquisitely written; expertly crafted; dazzling in its precision, restraint, and depth of feeling, Groundskeeping is a novel of haunting power and grace from a prodigiously gifted young writer.
LEE COLE was born and grew up in rural Kentucky. A recent graduate of the Iowa Writers’ Workshop, he now lives in New York.
A TODAY SHOW #ReadWithJenna BOOK CLUB PICK

“Groundskeeping is very fine work indeed from an exciting new voice . . . Given a novel so satisfyingly rich in themes and details, a review can only touch briefly on some of its many virtues . . . Groundskeeping is not only the story of a young man finding his vocation as a writer but also a wrenching examination of class differences, that third-rail topic in American literature, and of our current political polarization, which the narrator addresses with an unusual amount of empathy for the side he opposes. These elements supplement Cole’s nuanced depiction of a love affair between two people with more in common than they initially realize . . . Owen is entirely believable as a developing writer, jotting down his recollections and observations as the building blocks of his project to become an artist and a better human being. Alma is depicted with equal subtlety and generosity; their relationship drives the plot and brings the novel to a fitting conclusion.” —Wendy Smith, The Washington Post

“A sterling novel that presages a major career, Groundskeeping puts a fresh spin on the divided self adrift in a divided nation . . . Cole paints in airy watercolors rather than bright acrylics; his touch is light, restrained, but always authoritative and precise. As with Helen Frankenthaler’s canvases, Groundskeeping achieves poise and uplift. But beneath the languid tale of young campus love, he’s playing a shell game: The novel’s not only a forensic examination of our toxic politics, it’s also a sly sendup of literary culture, a conveyor belt of M.F.A. programs and prizes and teaching gigs . . . It’s a thrill — a relief — to read a writer who approaches his male characters with generosity and intuition, steering blessedly free of caricature . . . [An] exacting, beautifully textured debut novel.” —Hamilton Cain, The New York Times Book Review

“Scrupulously perceptive . . . Groundskeeping is filled with close observation, detailed shading. It is an absorbing love story, but it is also an examination of class in America, and it captures with sharp insight a moment in recent history.”
—Colm Tóibín, author of Brooklyn

“An extraordinary debut about the ties that bind families together and tear them apart across generations--this is a fierce, tender, and wholly unforgettable work from a hugely gifted writer.”
—Ann Patchett, author of The Dutch House

"A coming-of-age story inextricably bound with a love story, Groundskeeping gets at the hard work of finding your place in the world, the burden and exhilaration of fighting for who you might be . . . It's frankly preposterous this is a debut novel when Lee Cole's writing has such ease and authority and his storytelling rings so true."
—Maggie Shipstead, author of Great Circle

“Groundskeeping is a smart, funny, exhilarating debut about that time in life when you are clawing your way to a future that feels murky and impossible to reach. Lee Cole takes a hard look at our fraught cultural moment, our divides large and small, with fresh insight and wisdom and tenderness. I truly loved it.”
—Lily King, author of Euphoria and Writers & Lovers

"It’s one thing for a writer to have a great eye and another for him to know what it’s for. Lee Cole’s constantly roving eye is sharp and unerring and it misses exactly nothing. In his debut novel, Groundskeeping, he witnesses with great sympathy the painful passage between youth and adulthood that leaves us all the worse for wear."
—Richard Russo, author of Straight Man

“Groundskeeping is a deeply American, of-the-moment novel (think Trump-y relatives and hyperpartisan class woes) written with such exquisite language that it seems destined to break the bounds of time.” —Vulture

"Groundskeeping is a successful study of the human condition and underscores the relevance of both empathy and curiosity . . . Lee Cole is able to capture nuanced authenticity, depicting the genuine struggle between loving those close to you while still accepting them, if not entirely their beliefs and choices." —Southern Review of Books

“Cole’s novel is more than a love story or a coming-of-age tale. Written with superb attention to detail and subtle emotional complexities, the book also offers a lovingly nuanced look at America—its longtime residents and recent immigrants; its ramshackle rural beauty, urban revival, and suburban safety; and its generous opportunities for reinvention. In the end, it is a love letter to home . . . Perceptive and endearing, this novel signals the arrival of a talented new voice in fiction.” —Kirkus Reviews [starred review]

“With brilliant descriptions of the rural South, Cole’s slow burn of a debut novel achingly explores the definition of home, fate, and our shared humanity." —Poornima Apte, Booklist [starred review]