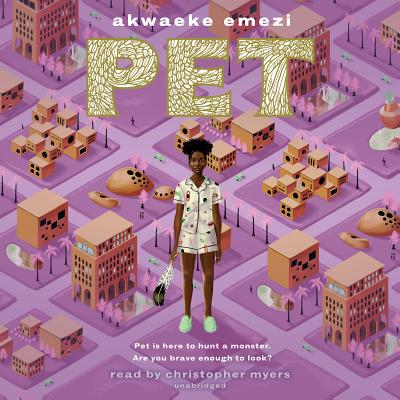 “Akwaeke Emezi’s debut YA novel is nothing short of breathtaking. Emezi’s prose is poetic and perfect, their world-building is seamlessly engaging, and the images and ideas they evoke in this delicious bit of a book are searing. It’s a critical examination of the society we live in today, of the future we hope to create, and of the constant, enduring need to keep our eyes and hearts open so that we can take care of the most vulnerable among us. I can’t wait to see what Emezi writes next.”
— Abby Rauscher, Books Are Magic, Brooklyn, NY

Pet is here to hunt a monster. Are you brave enough to look?

There are no monsters anymore, or so the children in the city of Lucille are taught. Jam and her best friend, Redemption, have grown up with this lesson all their life. But when Jam meets Pet, a creature made of horns and colors and claws, who emerges from one of her mother's paintings and a drop of Jam's blood, she must reconsider what she's been told. Pet has come to hunt a monster, and the shadow of something grim lurks in Redemption's house. Jam must fight not only to protect her best friend, but also to uncover the truth, and the answer to the question--How do you save the world from monsters if no one will admit they exist?

In their riveting and timely young adult debut, acclaimed novelist Akwaeke Emezi asks difficult questions about what choices you can make when the society around you is in denial.
Akwaeke Emezi makes their young adult debut with Pet on the inaugural Make Me a World list. An honoree on the National Book Foundation's "5 Under 35" list, a long-list nominee for the Carnegie Medal for Excellence, and a short-list nominee for the Center for Fiction's First Novel Prize, Akwaeke continues to receive accolades for their adult debut, Freshwater. The autobiographical novel also received rave reviews from the New York Times, the Wall Street Journal, the New Yorker, and the Los Angeles Times, among others, as well as starred reviews from Library Journal and Booklist. Their sophomore adult novel, The Death of Vivek Oji, is forthcoming in 2020 from Riverhead.

Learn more about Akwaeke at Akwaeke.com or on Twitter at @azemezi.
“A unique science fiction tale.” –Essence

“By far the most striking of the [National Book Award] finalists is PET, a sinister morality tale by Akwaeke Emezi.”  –The Wall Street Journal

“A riveting and timely work answering the questions about how you go about the world when the world around you is in denial.” –Out Magazine

"This soaring novel shoots for the stars and explodes the sky with its bold brilliance." —Kirkus Reviews, Starred Review

"A riveting and important read that couldn’t be more well timed to our society’s struggles with its own monsters." —School Library Journal, Starred Review

“Jam is also notable as a Black, trans protagonist in this important narrative that teens will want to read to gain some perspective on the modern political environment.” —The Bulletin, Starred Review

"Emezi’s characters are diverse in race, physical ability and especially gender.... Readers might see in Jam’s surroundings a version of a world that they, like Jam, might choose to fight for." —BookPage, Starred Review

“A haunting and poetic work of speculative fiction.” —The Horn Book