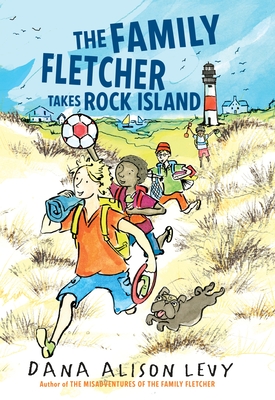 This is book number 2 in the Family Fletcher Series series.

Love the TV show Modern Family? Wait until you meet the family Fletcher! With two dads, four adopted brothers, two cats, and one pug, the Fletchers will have you laughing out loud!

The Fletchers are back on Rock Island, home of all their best summer memories. But from the first day they arrive, it’s clear that this year, things have changed. FIRST, a giant fence is blocking their beloved lighthouse. SECOND, they have new neighbors. THIRD, who the heck is the weird artist guy who's never actually painting? And FOURTH, there's now an ice cream truck! Can the island stay the same even with these crazy transformations?

Over the course of the summer, the Fletchers will learn that sometimes, even in a place where time stands still, the wildest, weirdest, and most wonderful surprises await.

"There is constant action and delightful humor, but there are also realistic present-day problems and happy solutions. An old-fashioned summer adventure set in a very modern world, this lively family tale will leave readers impatient for more. "--Kirkus, Starred

"While the other story lines reach satisfying resolutions, this one— about a young African American male struggling to figure out his identity in the largely white landscape of Rock Island—leaves room for thought-provoking, timely discussion.--Horn Book

"Lots of kids will want to take this along on their summer vacations."--Booklist
Dana Alison Levy was raised by pirates but escaped at a young age and went on to earn a degree in aeronautics and puppetry. Actually, that’s not true—she just likes to make things up. That’s why she has always wanted to write books. Her books about the Family Fletcher have garnered starred reviews, been named to multiple Best Of lists, and were Junior Library Guild selections. Also, her kids like them. Dana was last seen romping with her family in Massachusetts. If you need to report her for excessive romping or if you want to know more, head to danaalisonlevy.com or follower her on Twitter @danaalisonlevy.
"An old-fashioned summer adventure set in a very modern world, this lively family tale will leave readers impatient for more." —Kirkus Reviews starred review